This was 64-year-old Gajanan Manjalkar, a resident of Nalasopara, who breathed his last on the track. Participating in the senior citizens category

Mumbai: In their zeal to maximise participation in the Mumbai marathon, organisers do not insist on a fitness threshold test for runners. But it may be time for a reality check as one of the runners died of a cardiac arrest while participating in the 17th edition of the Tata Mumbai Marathon on Sunday.

Participating in the senior citizens category, he felt giddy and fainted on the road after he had run barely 4 km. He was immediately rushed to the Bombay Hospital where he was declared dead. 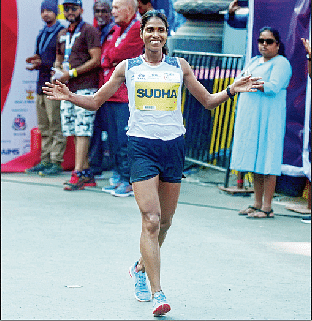 According to doctors, Gajanan was a diabetic and on medication. “We tried to revive him through shock therapy but his pulse did not respond,” said Dr Anil Sharma, Professor and Head, Senior Interventional Cardiologist, Bombay hospital. However, the Marine Line police station has filed an accidental death case.

On the other hand, 47-year-old Himanshu Thakkar literally got a second life and that too on his birthday after he suffered a cardiac arrest.

He was rushed to Bombay Hospital where medical diagnosis revealed that one of his arteries was blocked while the other one had got damaged after the attack.

“It was a tricky case as both is arteries weren’t functioning. Thankfully, he was rushed to the hospital within the golden hour and we got the chance to perform angioplasty,” said a senior doctor from the hospital who operated on him. Presently, he is under observation.

Participants do not undergo any fitness test during registration. “There is no medical test for any of the runners, be it ‘elite’ or normal.

A part of the problem is that at the time of registration, many of them do not give their correct medical history, as they do not want to jeopardise their run,’’ said one of the runners.

Procam staffers said they approve the runners based on the last marathon. “It is not easy to conduct a medical or fitness test on each runner,’’ they point out.

Shibani Gulati, a kidney transplant survivor, said that the only thing organisers can do is to have a tougher qualifying criteria for long distance categories.

“Runners should take responsibility of themselves and get an annual medical check-up done; they should also train themselves to be fit enough to run the distance,” she said.

A cardiologist said “There is no harm if senior citizens participate despite having health problems. But they should undergo a complete medical check-up to ascertain whether they are fit for running.”

The Asian Heart Institute had set up 11 medical aid stations all along the route for first-aid medical requirement with 2 medical base camps (40 and 20 beds each).

The hospital had deployed 12 cardiac ambulances which had a doctor and a nurse to ply on the entire route. The team also had 8 'mobile medics' -- doctors on motorbikes -- for the entire route.

Over 500 volunteers from the hospital, including doctors, nurses, paramedical and support staff were on duty.