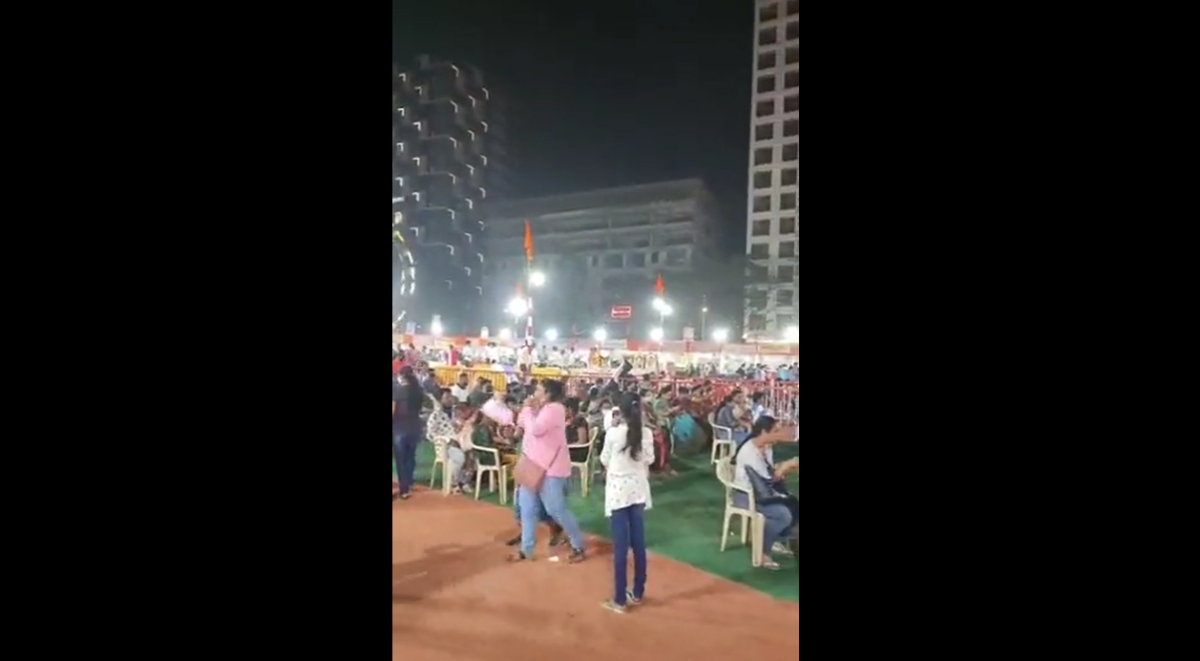 Yet another war of words erupted between the BJP and the Shiv Sena, after two BJP MLAs shared controversial videos and photographs of a Sena-organised jatra (cultural festival) at Andheri, questioning the Sena’s ‘double standards’ on Covid appropriate behavior.

BJP MLAs Atul Bhatkhalkar and Ameet Satam claimed that visual evidence showed a large crowd of people, some with masks and some without, at the festival in violation of the curbs announced by the Maha Vikas Aghadi government banning the assembly of more than five people at a time. They also shared photographs showing state’s Transport Minister Anil Parab visiting the festival after 10pm on Saturday.

When contacted, Bhatkhalkar, who also heads the BJP’s campaign for forthcoming civic elections, said, “Minister Anil Parab himself went to the festival where no Covid-19 protocols were being followed. Therefore, I demand the resignation of the transport minister and police should file an FIR against him and all the organisers of the event.

“This is the hallmark of the Maha Vikas Aghadi government. They impose these strict rules but make an exception for their own people,” he argued. He recalled several incidents in the past when the MVA leaders had allegedly violated the Covid protocols their government had announced.

“Ajit Pawar had opened an NCP office in Pune when the second wave was at its peak and a large crowd gathered there. No Covid-19 protocols were followed when the CM himself inaugurated the trial run of the Mumbai Metro. Shiv Sena MP Rahul Shewale went to Siddhi Vinayak temple even though it was closed for common people. Therefore, I say this is the hallmark of the MVA government that whatever rules they impose are only meant for the common people, not for their own party members,” he concluded.,

BJP MLA Ameet Satam, who represents Andheri west, said, “According to current protocol all big events and large gatherings stand cancelled, but the festival was organised with no strict Covid protocols. It is a clear violation of the rules imposed by their own government. At 10.20pm, the transport minister reached the venue to take part in the jatra. He has violated the Covid protocols laid down by his own chief minister and his own government.”

But the Shiv Sena defended Parab and said he never attended the festival. He only made a courtesy call and left. Responding to the allegations from the BJP firebrand, Shiv Sena corporator and the BMC health committee chairman, Rajul Patel said, “Anil Parab did not attend the jatra. He just went there, saw the crowd and left. Moreover, whatever our government says, we always follow it.”

Reacting to the accusation of Covid protocols not being followed at the festival, Patel said “If Covid protocols were not followed, then we will carry out Covid tests of the attendees. If anyone is found positive, then the BJP can say all this.” Defending Parab, she said, “Why are they asking for the resignation of Parab? Anil Parab did not organise the event. Our party has been organising lots of good programmes for people. Recently, we conducted 1,000 cataract surgeries and 4,000 health check-ups for people. Why did BJP did not demand anybody’s resignation then?” she demanded.

Patel said the BJP was trying to rake up a controversy with an eye on the forthcoming BMC elections. “And they fear that they will lose because the people of Andheri are gravitating towards our party,” she said.

The Free Press Journal tried to reach Parab for his comments but he did not respond to calls.