The police force also added 371 fresh cases of COVID19 on Monday taking the total number of cases within the department to 19,756
Sachin Gaad 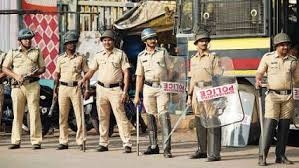 Mumbai: The state police force have lost 8 more personnel owing to Covid-19 on Monday taking the death toll in the force past 200-mark. The state police have recorded the highest number of coronavirus cases and fatalities as compared to the police forces across the country. With eight more deaths added to the figure, the tally stands at 202.

As per the data provided by the state police department, the Maharashtra police has lost two officers and six police constables taking the tally over 200. The police force also added 371 fresh cases of COVID19 on Monday taking the total number of cases within the department to 19,756.

As per the state police officials, the two officers who died are from Mumbai and Ratnagiri district while Thane City, Nashik City, Sangli, Jalgaon, Nandurbar, and Osmanabad each reported single death.

"The number of police personnel successfully recovered from the disease has reached 15,830 as on Monday while 3724 police personnel are still undergoing treatment at various hospitals in the state," said Vinayak Deshmukh, assistant inspector general of police (Law and Order).