The directions by CM and DCM came a day after the Leader of Opposition Ajit Pawar demanded that the government should immediately announce a wet drought and provide assistance to the farmers hit by heavy rains and floods.

The Shinde Fadnavis government proposed to make use of satellites to conduct an assessment of the damage to crops caused due to various reasons and link the process of payment of compensation to farmers for faster results, announced the state deputy Chief Minister Mr Devendra Fadnavis. The Chief Minister Mr Eknath Shinde and Mr Fadnavis at the state cabinet held on Thursday directed the administration to pay aid to the farmers whose crops were damaged till yesterday.

"Satellite-based crop damage assessment and compensation will be a game changer in this sector. The satellite images will decide the intensity of crop damage and go on to make a compensatory payment to farmers," Mr Fadnavis explained.

"The presentation I attended yesterday here was about this proposal. There were some discrepancies and technical errors in the plan, which I have asked them to get fixed," he said. This system will operate on autopilot mode, which means it will have minimum human intervention, he added.

As per the present system, the government has to issue a written order, asking revenue officials to physically visit the affected farms, carry out a survey and then submit a damage assessment report. The reports are moved from the tehsil to the district to the state level and depending upon the importance of the crop and its production cost, the government announces monetary compensation.

"If satellites are used for assessment and payment of compensation to farmers, it will save several hours of the government staff and help in speedy disbursement of funds to farmers," an official from the state revenue department said.

Meanwhile,  CM and DCM have asked the district collectors to pay special attention to providing immediate relief and aid to the farmers after carrying out Panchnamas. 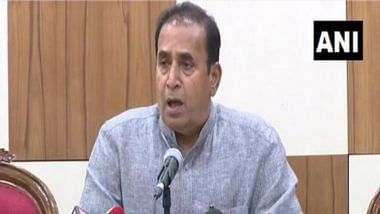 The directions by CM and DCM came a day after the Leader of Opposition Ajit Pawar demanded that the government should immediately announce a wet drought and provide assistance to the farmers hit by heavy rains and floods.

Meanwhile, Maharashtra Navnirman Sena chief Mr Raj Thackeray in a letter to the Chief Minister has also urged the state government to declare wet drought in the state. ‘’On the eve of Diwali the retreating monsoon has caused immense damage to the agriculture in Maharashtra. Therefore, the state government should review the situation on a war footing, take immediate measures and declare wet drought to give relief to the farmers,’’ he noted.