Union Home Minister Amit Shah will meet the chief ministers of Maharashtra and Karnataka here on December 14 to soothe tempers on the border dispute between the two states, NCP leader Amol Kolhe said here on Friday.

Kolhe was speaking to reporters after a delegation of parliamentarians of the Maharashtra Vikas Aghadi (MVA) -- Shiv Sena-NCP-Congress coalition -- met Shah to air their grievances on the border dispute. The MVA delegation also complained to Shah about the "insulting references" to Chhatrapati Shivaji Maharaj by Maharashtra Governor Bhagat Singh Koshiyari and some other BJP leaders.

"The home minister gave us a patient hearing and assured the MVA parliamentarians that he will call chief ministers of Maharashtra and Karnataka on December 14 and work towards finding a cordial solution to the issue," Kolhe, the Lok Sabha member from Shirur in Maharashtra, told reporters here.

On Thursday, the MVA parliamentarians had written to Shah warning that the Karnataka-Maharashtra border row had reached a stage where it could erupt into full-blown violence and had sought his personal intervention. In a letter to Shah, they claimed that "high-handed" actions by Karnataka had "hurt the sentiments" of the Marathi-speaking people in the border districts at a time the matter was in the Supreme Court.

Kolhe said the MVA delegation also sought strict action against those leaders and constitutional authorities who had made "insulting references" to Chhatrapati Shivaji Maharaj.The Karnataka-Maharashta border row escalated into violence after vehicles from both states were attacked and damaged in Belgaon and Pune.

Since its creation on May 1, 1960, Maharashtra has claimed that 865 villages, including Belgaon (now Belgavi), Karwar and Nippani, should be merged into Maharashtra. Karnataka, however, has refused to part with its territory. 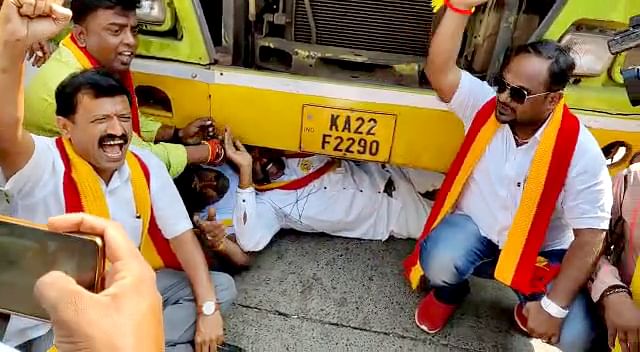