First show of Agnes of God staged peacefully at NCPA 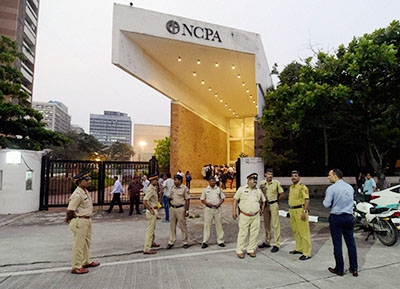 Mumbai: Police security at NCPA theatre for play "Agnes of God" in Mumbai on Monday after Catholics raised objection against the play. PTI Photo by Santosh Hirlekar (PTI10_5_2015_000304B) |

Mumbai : After state minority affairs minister Eknath Khadse refused to ban the play Agnes of God, the first show of the controversial play was staged without any hurdle at the National Centre for the Performing Arts (NCPA) at Nariman Point on Monday.

The director agreed to remove the word ‘Immaculate Conception’ from the advertisements of the play, which tells the story of a nun who delivers a child.

Catholic groups demanded complete ban on the play and threatened legal action against cast and crew of the play Agnes of god. Their protests were on grounds that their religious sentiments were hurt. Joseph Dias, general secretary of the Catholic Secular Forum and Kaiza Kotwal, director of the play met Khadse over the issue.

Khadse said that the government would review the play and then decide over the ban. “We will shoot the full play and then will review it. If there is anything found to be objectionable, then we will think about the ban. As of now the censor board has certified the play and we will not ban it completely,” said Khadse.

The play was earlier scheduled to be staged at Sophia Bhabha Auditorium on Sunday, but was cancelled because of these protests.

Monday’s show was staged in a heavy police bandobast. Earlier, the entry was announced as free for all, but in the wake of the protests, only valid pass holders were allowed to go inside the auditorium.