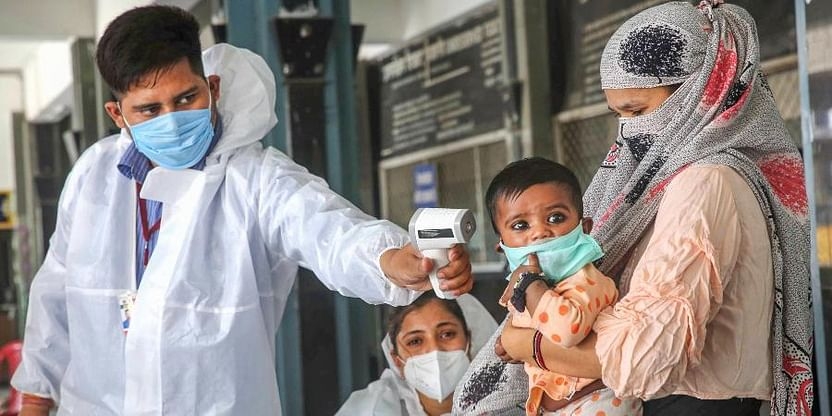 With the addition of 175 new cases of coronavirus, the infection count in Maharashtra's Thane district has gone up to 5,63,556, an official said on Tuesday. These new cases were reported on Monday, he said.

The virus also claimed the lives of five more people, which pushed the death toll in the district to 11,464, he said, adding that the COVID-19 mortality rate in Thane stood at 2.03 per cent.

In neighbouring Palghar district, the COVID-19 case count has gone up to 1,37,547, while the death toll has reached 3,281, another official said.

Meanwhile, Maharashtra reported 1,485 new COVID-19 cases on Monday, the lowest daily count in more than 17 months, and 27 fresh deaths, taking the infection tally to 65,93,182 and the toll to 1,39,816, while more than 2,000 patients recovered from the disease, a health department official said. No fresh cases were reported in a dozen districts.

Maharashtra witnessed a dip in daily COVID-19 cases and also fatalities as compared to Sunday, when it had registered 1,715 infections and 29 deaths. The fall in cases came in the backdrop of a dip in daily coronavirus tests, which slipped below the 1 lakh mark.

The official said with 2,078 patients discharged from hospitals in the last 24 hours, the number of recovered cases increased to 64,21,756. The state now has 28,008 active cases.

He said Maharashtra has 2,08,613 people in home isolation and another 961 in institutional quarantine.

Maharashtra's COVID-19 recovery rate stands at 97.4 per cent, while the fatality rate is 2.12 per cent.

The cumulative number of coronavirus tests conducted in the state climbed to 6,11,16,353, of which 95,890 samples were examined in the last 24 hours, the official said.

At least a dozen districts and three municipal corporations did not report any new COVID-19 cases, according to the official. Mumbai district reported the highest 371 new infections in the state.

Among the eight regions (each consisting of a set of districts) of Maharashtra, the Mumbai region reported the highest 691 new COVID-19 cases, followed by 356 cases in the Pune region.

According to the official, among the 27 fresh fatalities, the highest 17 were reported from the Pune region, followed by 6 in the Mumbai region. The Latur region reported two, while one fatality each was registered in Nashik and Aurangabad regions.

Kolhapur, Akola and Nagpur region did not report any fresh fatalities, he said. 'I didn't want to get diabetes': Maharashtra minister Jayant Patil on why he refused to take home...