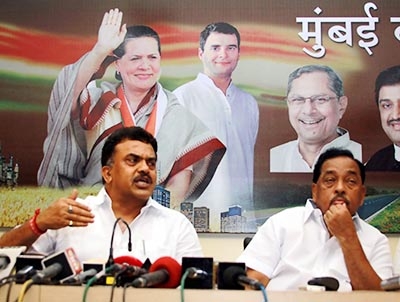 Rane back in action, accuses Uddhav of being hand in glove with builders

“The government has not scrapped the DP as is a common perception, but has just asked the corporation to ‘rethink’ over it and submit a renewed plan,” Nirupam said citing the government order in this regard.

“In fact, Development Plan is the prerogative of the local civic body and the State government comes into picture only for the final clearance after it is prepared and suggestions and objections are received,” he said.

Nirupam had even earlier criticised the plan saying that it was drawn up by planners using Google Maps sitting outside the country.

Senior Congress leader Narayan Rane who too was present at the occasion also hit out at Fadnavis stating that if he is still a proponent of separate Vidarbha, he should not unfurl the tricolour at the 55th anniversary of the foundation of Maharashtra state on May 1.

“Uddhav Thackeray must not be aware of the full form of the DP, but only about the economics involved in it. He is hand in glove with builders,” Rane alleged.

The Congress leader alleged that Thackeray’s PA Milind Narvekar had been making calls to builders offering to make changes in the draft DP to suit their interests.

“Reservations of non-development zones are changed only if there are financial transactions,” Rane claimed.

Rane said Mumbai BJP chief Ashish Shelar’s demand seeking action against those involved in sanctioning the draft DP and its preparation shows that the Sena-BJP tug-of-war had come out in the open.

Meanwhile, Mumbai BJP chief MLA Ashish Shelar hit back at Nirupam and Rane for their comments. “The orders given by the Chief Minister are completely rational and according to the legal provisions,” Shelar said and asked the MRCC chief to reveal the information regarding the phone calls that were made to the consultants preparing the development plan from the then CM’s office. “Such information would reveal who were the real culprits of the skewed DP just as I had demanded,” he said.