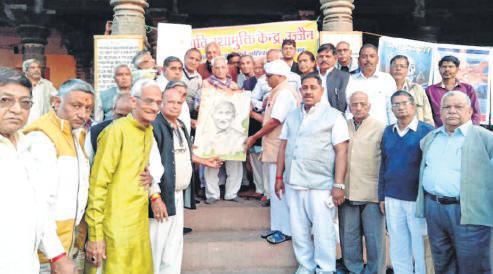 Ujjain: Mahatma Gandhi was remembered on his shraddha divas by Mahatma Gandhi Seva Pratishthan, Jagruti nasha mukti Kendra, Bhartitya Gyanpeeth, Kahdigramodyog vikas mandal and Madhyabharat Khadi Sangh. The chief guest of the programme freedom fighter Premnarayan Nagar shared his reminiscences when the father of nation was shot dead in Delhi and after the discussion with Lord Mountbatten- the then PM Nehru allowed the broadcast of the news from radio stations, the ashes of Gandhi had reached in Ujjain with an urn.

He asserted some people are opposing the doctrines of Gandhi and even shot at his portrait but they cannot erase the doctrines of truth and ahimsa of Gandhi as they are eternal. Freedom fighter Amirtlal Amrit and Sevadham founder Sudhir Goyal also shared their views on Gandhi’s relevance in present times. Ex-MP Satyanarayan Panwar underlined the necessity of spreading Gandhian thoughts.