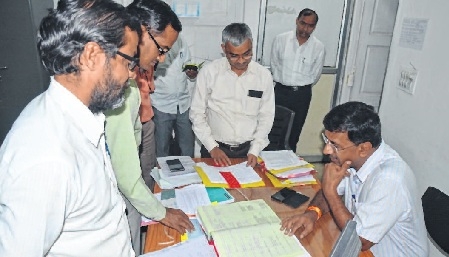 Theme at chosen venue on saturday. He Also asked to invite artists from across the Division to participate in the programme. Nodal officers have also been appointed for The programme. He asked the officials to Organise programmes at district and tehsil Level and submit description, photos cutting To him on november 5. Notice to sr digital for Poll code violation Collector and district electoral officer Manish singh released show cause notice To sr channel for continuously showing Advertisements of bharatiya janata party On its channel number 5.

He directed the Channel to present certification letter of Advertisement and permission letter to Run separate media channel within 24 Hours. Sr digital tv and broadband limited had Shown bjp persons and advertisement on October 30 incessantly till 5.28 pm in the Evening on its channel number 5. Notably, Election commission has formed mcmc Committee to monitor and certify the advertisements During election period.

Standing committee meet today Collector manish singh will hold a Meeting of standing committee on Thursday from 12 pm at bhrihaspati Bhavan to inform the political parties About filling of nomination form, promissory Note and withdrawal of election Nomination. As nomination filling begins From friday and will continue till November 9. Scrutiny of nomination papers Will be done from november 12-14 Has been set for withdrawal of nomination Papers. Voting will be held on november 28 and results of election will be Declared on december 11. Holiday on polling day Polling for assembly election 2018 will be Held on november 28. General administration Department released directives of Public holiday in whole state under negotiable Instrument act.

Collector and district electoral officer Manish singh visited election Control room on wednesday. He Checked the records of complaints And asked the officials to work With sincerity. He also checked the Complaints filed in c-vigil application And their resolution status. Officials Informed singh about the Gps system installed in the control Room to monitor location of vehicles. He directed the officials to Monitor the location of sft and Fst via gps.