From Shankar Mahadevan to Mahesh Kale: Musicians across genres come together to create an Earth Day anthem 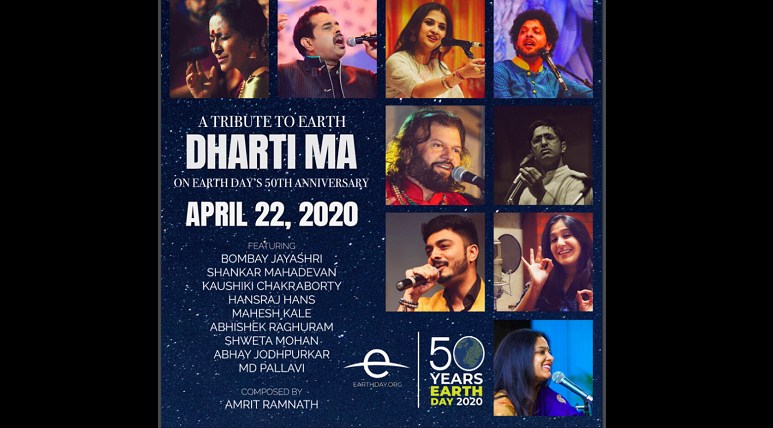 On the occasion of the 50th World Earth Day, musicians across genres, styles and languages from the across India have come together to create a World Earth Day Anthem - Dharti Ma – A Tribute to Earth which will officially be released to mark the occasion.

With an amalgamation of styles, the song has been rendered in eight languages by some of the finest musicians of India - Bombay Jayashri, Kaushiki Chakraborty, Hansraj Hans, Shankar Mahadevan, Mahesh Kale, Abhishek Raghuram, Shweta Mohan, MD Pallavi, and Abhay Jodhpurkar.

Apart from training under his mom Bombay Jayashri, 21-year-old Hindustani classical vocalist, Amrit Ramnath, (whose brainchild the anthem is) has been dabbling in compositions for a while. He has been tinkering away with the idea of the anthem since December 2019.

“But composing and finding lyricists to write a few lines in all the eight languages took a while. It was also being done remotely on the phone, email, etc. By the time the first recordings came in, it was already end of January and the threat of the COVID-19 pandemic was looming large on all of us,” he said.

“Thankfully, putting it all together in the studio was done in the nick of time before the lockdown began,” he added,

Oscar nominee Bombay Jayashri Ramnath, who is also an ambassador of the Earth Day Network, said it felt special to see be singing a composition which is created by her son and disciple.

“Music heals, music is a Prayer. We are going through a very challenging time with this pandemic. Through the notes and the melody, we wish for good health and wellbeing of the whole world.”

She explained: “In a sense the lockdown is asking us to dive deep within and cleanse ourselves of all negativities and emerge compassionate and empathetic. Only will we? Like a Mother who is forgiving, Mother Earth has nurtured and sustained us in spite of everything that we have done to the planet and our fellow beings. This composition is a way of paying tribute to this.”

“I would say this is more an apology for all the excesses of mankind than only a tribute. You open up and tell the Mother Goddess everything and ask her bestow her blessings on you. I hope the sentiment carries across to audiences,” he said and was all praise for his fellow artistes on the album.

He recounted how Bombay Jayashree and he began their musical journeys together.

“We would take BEST Bus no. 8 and come from Chembur to Matunga to train in music under Balamani and always shared a great rapport. We would have to count our pennies those days. As we walked from Balamani maami's class near Matunga station to the 8 Ltd bus stop at Matunga circle to head home, one of us spent a princely 25 paise to buy sev puri which we shared.”

According to him life has come full circle in singing under Amrit's baton for this song.

“It’s such a hauntingly beautiful composition. I am hardly surprised considering his mother's superlative musical genius.”

Indore-native vocalist Abhay Jodhpurkar also feels the composition was what makes the anthem so special.

“I was actually in collaboration with Jayashreeji on another project and that's when Amrit approached me. Though I am from Indore and familiar with Gujarati, after I got the lyrics I ran it past some Gujarati friends to get the pronunciation and feel absolutely right and recorded only with a tanpura and no accompaniment,” says the singer known for his close collaboration with Oscar awardee A R Rahman and his songs in Tamil, Telugu, Malayalam and Kannada.

“I had no clear idea what it would sound like in the final mix but when I heard it, I had tears in my eyes. This project will always be like a dream come true since I am singing with stalwarts whose singing I have admired from early childhood.”

Vocalist Kaushiki Chakraborty, also an ambassador of Earth Day Network, told this writer: “I feel extremely honoured and privileged to be one of the ambassadors of the Earth Day Network. This anthem is very special and I believe it’ll help raise the awareness amongst people for our Mother Earth and the necessity of taking care of her and leave a better planet for generations to come.”

Leading playback singer Shweta Mohan who has rendered the Malayalam part of the song, also said: “I worship Nature. I believe in the energy of Mother Earth as much as I believe in religion. We need to invoke her blessings now more than ever.”

Karuna Singh, Regional Director Asia, Earth Day Network under whose aegis this anthem was created said: “Earth Day Network strongly believe that music unites people across borders, regardless of whether they speak the same language or not. In this moment of acute climate crisis, humanity needs to speak in one voice to protect our common home, Earth. The song is a gift to all who inhabit Earth. We hope it will inspire everyone to do their bit for the good of our common home – Earth.”