Ranbir Kappor and Alia Bhatt on way to Ujjain |

They were protesting against them in view of Ranbir’s statement regarding beef. The Bollywood artists along with the production team of Brahmastra film came here to pray for the success of the film. Amid verbal duel and assault between policemen and activists, chaos prevailed around the Mahakaleshwar Temple for more than two hours. As soon as the activists of Hindu organisations got to know that Alia Bhatt, Ranveer Kapoor, Brahmastra movie director Ayan Mukerji and the production team would come to the temple around 7 pm on Tuesday, they became alert from 4 o’clock itself.

They started gathering around the VIP entrance gate, but the police did not notice it. The protesters led by VHP leader Ashok Jain Chaywala and Bajrang Dal leader Ankit Choubey showed black flags and raised slogans. 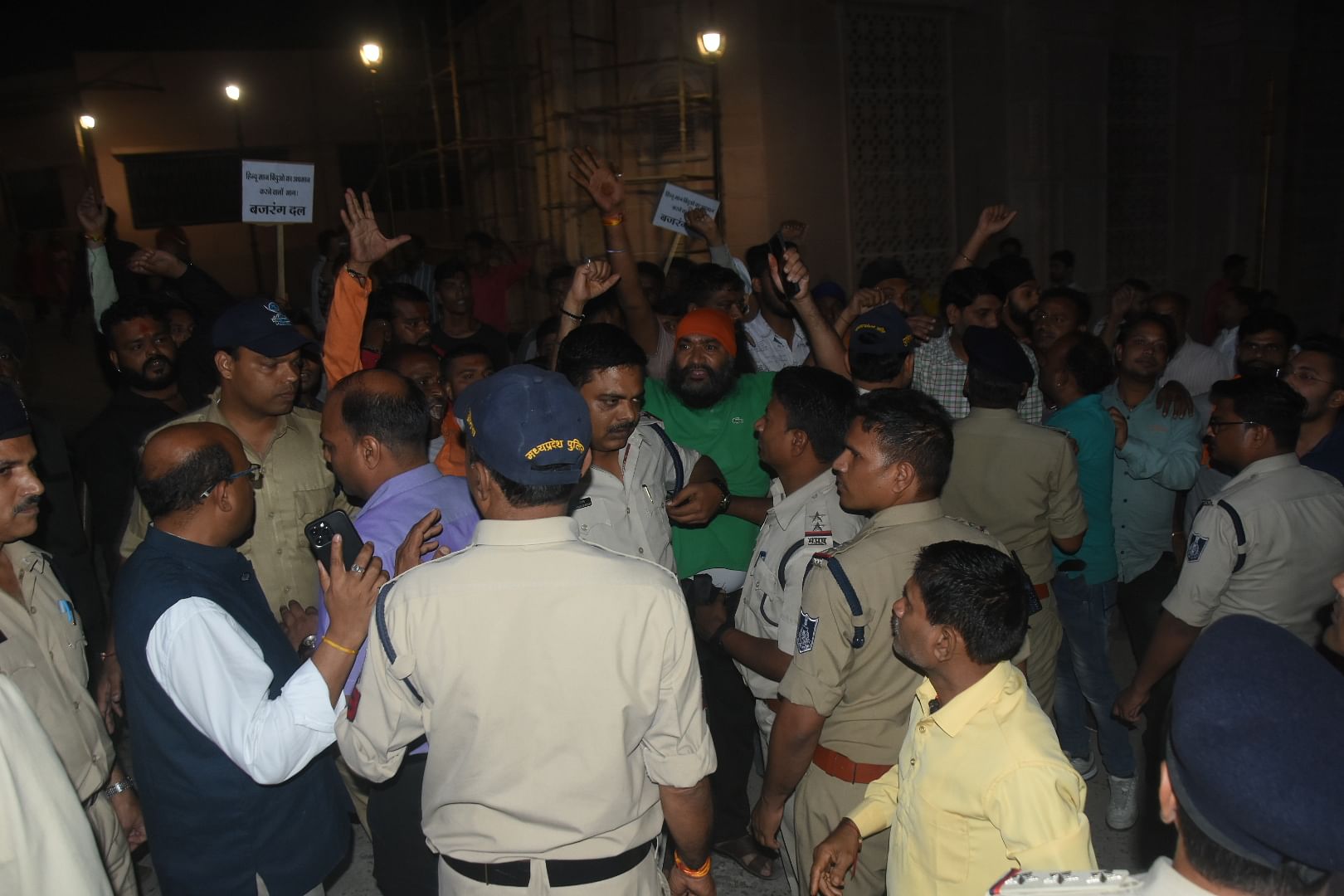 The activists of Hindu organisations stage a demonstration. | FP Photo

When the police tried to stop the protesters, the Bajrang Dal activists had a fierce argument with the police, the police chased the activists and the whole incident was caught on camera. Although the film’s production team and Ayan Mukerji director took darshan of Baba Mahakal in the sanctum-sanctorum of the temple and also talked with the media, Alia and Ranveer could not reach the temple.

Ayan, who reached the temple, told that he had a strong desire to see Baba Mahakal before the release of the film and he is very happy that he had a darshan today and that he prayed to God for the success of the film. He said that we have Ranbir Kapoor’s trainer Dhipesh Bhatt who is popularly known as Shivohm and a member of the team, Darshan has been very good. Ayan kept silent on the question of a protest staged by the activists of Hindu organisations. The Mahakal police have registered a case against the workers of Hindu organisations under Section 353 of the IPC. This action was taken in relation to the fight between the CSP and the station in charge and workers in the presence of ASP, ADM, SDM and all the officers.

During this time, the intelligence and security system of the police seemed to be failing. In the whole case, when the media wanted to understand the matter from all the officers including ASP Inderjit Bakalwar and ADM Santosh Tagore, they kept silent. Till 9.30 pm the entire production team left the temple, the people of Hindu organisations reached Mahakal police station and gheraoed it demanding action against the policemen. Meanwhile, Ranbir and Alia were taken to Indore amid heavy security.