In the morning, the polling parties, who reached the Ujjain Engineering College (UEC) to collect the voting material, had to face the rain.

Ujjain (Madhya Pradesh): Heavy rain on Tuesday made the polling personnel, who are on duty to conduct the Ujjain Municipal Corporation (UMC) elections, miserable. Continuously dripping water in the dilapidated booths meant that there was no place to sit. Women employees were the most troubled by this situation.

In the morning, the polling parties, who reached the Ujjain Engineering College (UEC) to collect the voting material, had to face the rain. Although arrangements for distributing the material were made under the dome erected for the purpose, it started raining heavily when the polling staff left.

Four booths number 469, 470, 491 and 492 have been made in ward number 48 in the divisional boy’s hostel located behind the Model School on Indore Road. Twenty women employees have been deputed there and were troubled by the constantly dripping water. There was water in every room of the hostel. Even the main gate of the hostel was waterlogged making entry and exit difficult. There was no dry space to sit even in the inner rooms. There is no separate toilet for women. The female employees were agitated due to the mess, though they were scared to give a statement but did express their anger over the arrangements made by the local administration. 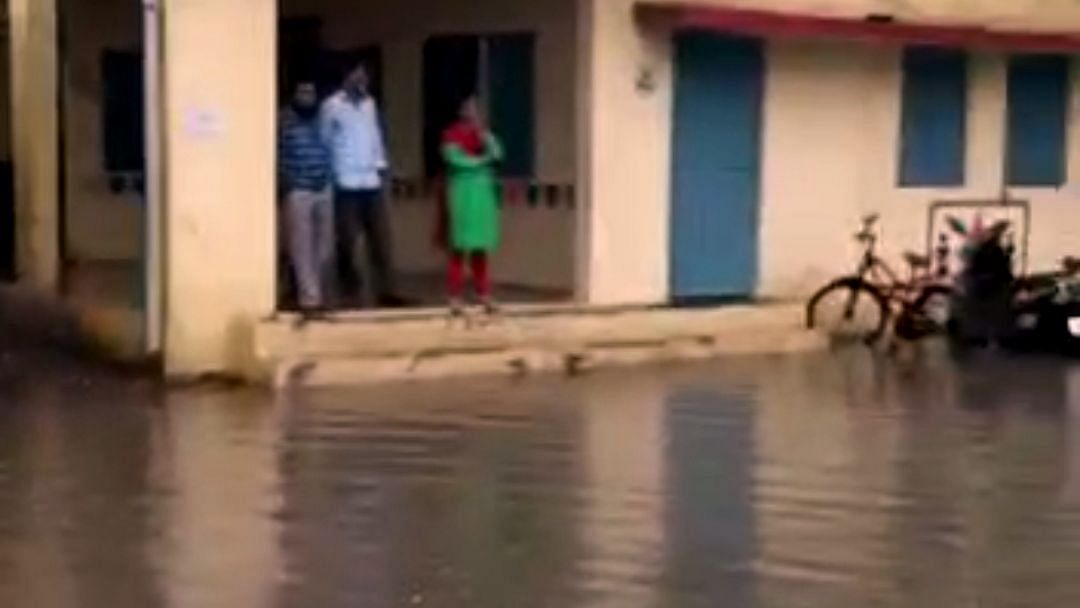 Knee-deep water was seen at the Government Nootan Girls Higher Secondary school on the eve of polling in Ujjain on Tuesday. | FP Photo

Somewhat similar was the case with Government Madhavganj School located on Jaisingpura Road. Five polling stations have been set-up in the school. There was waterlogging in front of polling station number 322 and 323 and the employees had to sit in booth number 328 to receive polling material. The way to booths number 326, 327 and 330 is also from the front and the polling staff could not enter due to the water accumulation.

Meanwhile, the polling parties left from UEC on Tuesday to conduct the voting for UMC elections. Voting will be conducted by 2,200 employees and officers at 568 booths, 121 of which have been categorised as sensitive. The booths are divided into 67 sectors.

The poll parties will start returning from Wednesday evening after the polling is conducted and are expected to return by night. Polling parties were seen leaving the UEC carrying election material and EVMs.There are four lakh 61 thousand 103 voters in Ujjain city and half of them are women. Mahesh Parmar from Congress, Mukesh Tatwal from BJP and Santosh Verma from AAP are in fray for the post of mayor. Voting will be held from 7 am to 5 pm. The counting of votes will be conducted on July 13 at UEC.

The police have also completed their preparations for the UMC elections. 3 policemen each will be deployed at sensitive centres and 2 at general centres. Apart from this, 73 mobile parties and administrative and police officers will also move continuously across the city.

Meanwhile, Daulatganj Wholesale Kirana Bazaar Association has decided to keep business closed due to voting on July 6. There will be no trading in the market on Wednesday. The administration has also declared a local holiday for voting.