No increase in property tax for next 5 years; houses up to 500 square feet to be free from property tax; no daily tax collection from cart owners, street vendors and small traders

Ujjain (Madhya Pradesh): The Congress released its manifesto, named ‘Sankalp Patra’ for Ujjain Municipal Corporation elections. All the burning issues of the city have been included in the 36-point resolution letter. The Tata sewerage project, repair of excavated roads, purification of Kshipra, delivering birth, death and marriage certificate, as well as ration cards on the doorstep along with smart park and yoga centre all, find a mention in the manifesto.

The three most important promises made are - no increase in property tax for the next 5 years, 500 square feet of houses to be free from property tax and no daily tax collection from haat, cart, street vendors and small traders.

The manifesto talks about a new over-bridge between Freeganj-Dewasgate, a new dam on the Gambhir river, a new drainage system to rid the city of water logging, markets for essential commodities around the Mahakaleshwar and other important temples to be kept open round-the-clock and removing liquor and meat shops within a radius of 100 meters from the temples. The Congress has promised to make the darshan system of Mahakal temple completely free of charge, separate admission to local devotees on the basis of Aadhar card and keep dharamshalas of societies free from property tax.

Construction of excellent roads up to the ancient temples of the city including Chintaman Ganesh, Gadkalika, Shani Mandir at Triveni, Siddhavat, Sandipani Ashram, Kalbhairav ??Temple, Bhartrihari Caves and Valmikidham, charging stations in place for e-rickshaw, Freeganj cut-offs to be made encroachment free and to improve the cleanliness system.

Emphasis has been laid on implementing the mayor incentive award scheme. Along with the construction of manglik bhawan or community hall in every zone of the city, it also talks about building smart toilets at major places of the city.

Patwari also took a jibe at BJP’s manifesto and asked if the BJP is talking about choosing the mayor or is it talking about the vice-chancellor of the university. According to him, one full page of their manifesto talks about the new courses run by the varsity and about opening a medical college on the PPP model which indicates that they have little interest in running the city government. 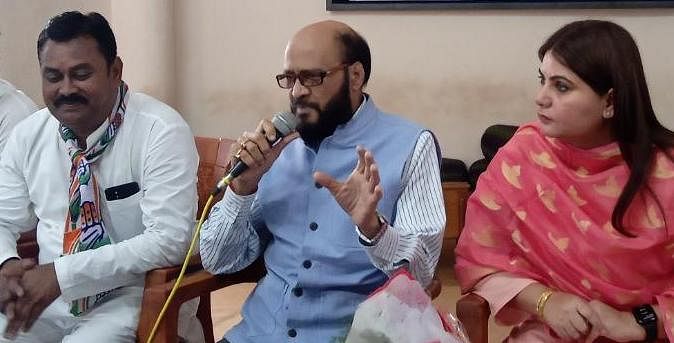