Ujjain: Acting on a tip-off the district police busted a raw liquor unit in Banskhedi village late on Friday. The main accused and BJP-supported village sarpanch Narendra Kumawat involved in the case is on the run.
A total of 1,600 litres of ‘poisonous’ spirit contained in 8 plastic drums of 200-litre capacity each worth Rs 8 lakh used for making Illicit country-made liquor worth Rs 22, 000 was seized.
Congress MLA from Ghattia Ramlal Malviya alleged that the main accused in the case Narendra Kumawat has been conducting the business of illegal liquor owing to his political patronage. This is evident from a fact that he was operating the unholy business from a government community building at village Banskhedi, he added. He appealed to the authorities to book him for misusing a government building and to attach his properties with immediate effect.
Empty drums hidden in a 65-ft deep well were pulled out by cops in association with villagers on Saturday.
Police conducted the raids after receiving a tip-off that drums filled with spirit used to make fake liquor are kept at the farm of one Lakhan Kumrawat, who lives in village Sipawara under Bhairavgarh police station area.
The police team reached Sipawara and found 8 drums containing 1,600 litres of spirit kept at Lakhan Kumrawat’s farm. When questioned, the servant present there told police that the said drums belonged to Narendra son of Mohanlal Kumawat resident of Banskhedi.
The cops informed SP Satyendra Kumar Shukla about it. After which collector Asheesh Singh SP rushed to the spot and seized drums full of spirit and 35 kg of urea and ordered the accused be arrested.
However, the accused managed to evade the arrest and fled the house before the police team could reach Banskhedi. Police are searching for him. Narendra’s wife may also be made accused in the case, said sources.
SP said that the sprit drums and urea seized from village Sipawara were to be used to make spurious liquor. Preliminary investigation revealed that Narendra Kumawat was operating a fake liquor factory.
He allegedly stopped his illicit liquor business but was about to launch it again.
Apart from sprit, urea, bottles, nozzle, car among other things were also seized. Action will be taken against him under NSA besides sections of spurious liquor making, the SP hinted. A case under Section 34 (1), 34 (2) and 49 (A) of the MP Excise Act have been registered, said a source.
Police sources said the sale of spurious liquor through sprit, urea and other drug tablets was being carried out by Narendra Kumawat for a long time. But, Bhairavgarh police station failed to act against him due to his involvement with a political party.
Cops alleged that during the last lockdown, he sold spurious liquor worth lakhs of rupees, last year. SP has line attached police station in-charge Brajesh Shrivastava for showing dereliction in executing his duty. SP said action will be taken against other cops who are found to be complicit in the crime.
Police learnt that a well built-in Narendra Kumawat’s farm in Banskheri also holds a tranche of drums full of spirit.
However, the search of the said well was called off owing to a lack of facilities to conduct the search at night.
SI Rahul Chauhan and his team reached Banskhedi in the morning where over 19 empty plastic lying in the 65-ft well were taken out with the help of villages.
SP said the source from where sprit in such a large quantity was purchased will be investigated. An inquiry is being conducted into the person who sold the spirit 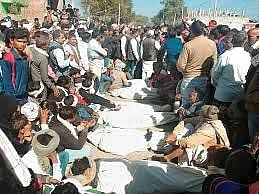