Ujjain (Madhya Pradesh): The effigy of chief minister Shivraj Singh Chouhan was burnt and a dharna was staged by Congress workers to protest against the atrocities on women at Tower Chowk, here on Saturday. A large police force was deployed around the area since morning for security arrangements.

Due to this, the leaders threw a burning effigy from the chamber of a lawyer located on the second floor of Chhota Gopal Mandir, which fell on the green mat above the Gajak shop hanging on electric wires, which caught fire. Efforts were made to extinguish the fire with the fire extinguisher, but the fire was not extinguished, and firefighters on the spot had to be pressed into serivce to control the fire. A verbal duel ensued between the Congress workers and policemen. 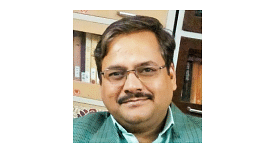