HomeIndoreTiranga Yatra: Rally taken out from district jail in Alirajpur; know more about other regions

Tiranga Yatra: Rally taken out from district jail in Alirajpur; know more about other regions

At the beginning of the rally, the judges worshipped the portrait of Mahatma Gandhi, lit the lamp and offered floral garlands. The rally was flagged off by the principal district and sessions judge Arun Verma.

Alirajpur (Madhya Pradesh): As part of the Amrit Mahotsav of Independence, a Tiranga rally was organised from the district jail premises on Saturday under the ‘Har Ghar Tiranga Abhiyan’.

At the beginning of the rally, the judges worshipped the portrait of Mahatma Gandhi, lit the lamp and offered floral garlands. The rally was flagged off by the principal district and sessions judge Arun Verma. 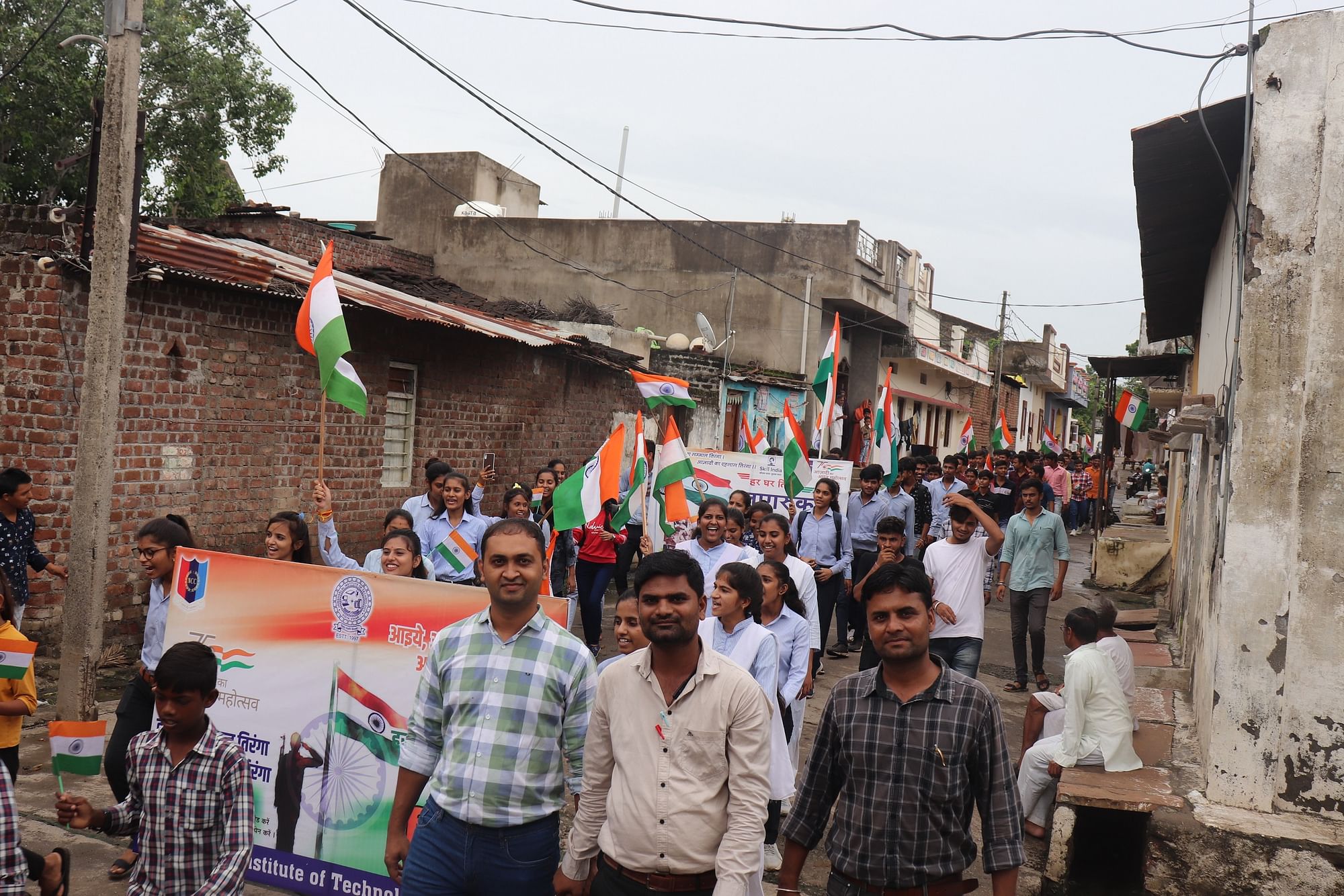 Under the Amrit Mahotsav of Azadi, a Tiranga rally was organised by the students of Jawaharlal Institute of Technology (JIT) Borawan in nearby Borawan village. Along with the Tricolour rally, engineering students performed street plays to awaken the feeling of patriotism and to explain the importance of our National Flag. Along with this, the students also staged awareness against child education, women's education and corruption. On this occasion, former union minister of state, Arun Yadav also inspired the students and countrymen towards patriotism and respect for the Tricolour. He gave the slogan "Tiranga in every mind", explaining its meaning to the students and the general public. Our Tricolour is a witness to the sacrifices for freedom and struggle. The first duty of every countryman is that we have to maintain its glory forever. Students and faculty members of Jawaharlal Institute of Technology Borawan were present in the rally.

The Amrit Mahotsav of Independence was celebrated at The Vardhman Heights International School, Khachrod on Saturday. In this festival, the children of Class Nursery, LKG and UKG came in the costume of the freedom fighters. For students of Classes 1 to 5 a patriotic poetry recitation competition was organised in which children came up dressed as national heroes like Rani Laxmibai of Jhansi, Bhagat Singh, Chandrashekhar Azad to recite their poems. A speech competition was organised for students of Class 6th to 12th on the topic of importance of freedom fighters in the freedom struggle. Institute director Lalit Kakaria, Vaibhav Bupkya and Balesh Bupkya said that through these kinds of activities we can give information about the history of our freedom and the freedom fighters to the children. Shree Raj Rajendra Jayantsen Vidyapeeth, Khachrod hosted a programme to connect the students with meditation and spirituality. The chief guest of the programme was Pooja Shah who came from Gandhinagar, Gujarat. She taught meditation to the students & teachers for about 30 minutes. During the programme, she said, Saraswati mantra (OM AIM NAMH) sharpens the intellectual power. During the conclusion of the programme, Pooja Shah was honoured with shawl and shriphal by the principal of the school, Veena Kundi. All staff members and students from 6th to 12th were presented. Under the Amrit Mahotsav of Independence, students of Saraswati Vidya Mandir, Baroda, on Saturday held a Tiranga Yatra from the school premises. All the students of the school came out with enthusiasm with the Tricolour in their hands. Students dressed like Veer Bhagat Singh, Bharat Mata, Army personnel, Rani Lakshmi Bai, Chhatrapati Shivaji, Subhash Chandra Bose, Vivekananda, Radha-Krishna, Balram, Ram-Lakshman, Commandos, Baba Bholenath participated in the rally. The Yatra was accorded a grand welcome at various places in the city. The yatra ended in the school premises. On this occasion, the principal of the institution, Narayan Singh Maldavadia and the entire Acharya family were present.