Mhow: Postcards of the picture of Gopal Mandir went all over the world during the British rule

Fascinating history of Gopal Mandir; A temple whose fame travelled across the shores

Mhow (Madhya Pradesh): Picture postcards were very popular during the 1900s and it is a matter of pride that the city's Gopal Mandir features on them. These postcards reached many parts of the world as they were used for correspondence by the British officers posted here. Additionally, British troops used to send these picture postcards with messages for their families back home. 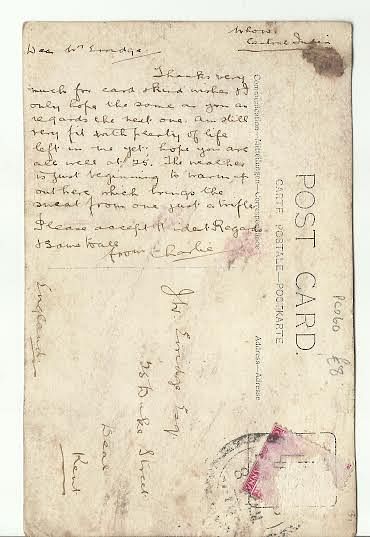 Interestingly, there are 3 such picture postcards of Gopal Mandir. This shows that the temple was a landmark of Mhow in those days and the presiding deity was revered in the nearby areas. But it was not just the locals who were fascinated. The idol made of obsidian was a sculpture of wonder for the British who were fascinated by it.

Its fame spread far and wide and attracted people from afar. One such person was Jani Bai who was so enamoured that she came all the way from Vrindavan to live in Mhow about 60-65 years back. She made Mhow her home and only occasionally used to go to Vrindavan.

Scientist Vijay Sanghi remembers that Jani Bai was very fair, was always barefoot and wore a saffron-coloured dhoti. While performing the aarti she used to get totally engrossed in her devotion to Gopalji.

HomeIndoreMhow: Postcards of the picture of Gopal Mandir went all over the world during the British rule