Mandsaur (Madhya Pradesh): Scores of school students from the Parshwanath Government High School in Pipliyamandi village of Mandsaur district staged a protest against the suspension of their Sanskrit teacher Sanjay Kumar Panchal.

School students demanded that the suspension of Panchal be revoked. They submitted a memorandum to the tehsildar Preshankar Patel.

Recently the school education department suspended Panchal after the department received complaints against him of misbehaviour with the school principal, negligence in work, and non-compliance with government instructions.

After getting the complaint, the district education officer conducted a departmental inquiry on complaints against the teacher in which he was found guilty.

Based on the report of the inquiry, the district collector suspended the teacher on July 29.

Following his suspension, school students came out in a protest against the action taken against the teacher. On Tuesday, students began Jal Satyagrah by standing in a nearby pond. Somehow, the police team and administrative officer convinced the students to come out of the water. But students continued their protest demanding to revoke the suspension of Panchal.

Meanwhile, district collector Gautam Singh said that the teacher was found guilty in the investigation.

Disciplinary action has been taken against him and now the teacher is taking the help of innocent children.

It is an administrative process. He also did not cooperate in the investigation, now he is taking the help of the children.

On the other hand, Panchal claimed that he was innocent and said that he had received the suspension letter three days ago. He does not know based on which complaints he has been suspended. He is not even aware of the student's protest for revocation of his suspension. 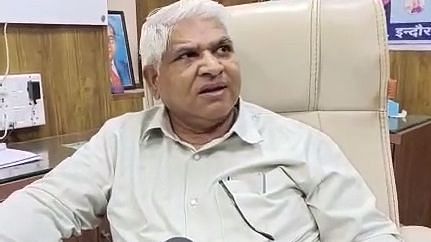