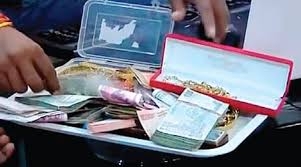 As per preliminary reports, a team of special police establishments from Ujjain led by deputy superintendent Basant Shrivastava raided the house of Nandkishore Dhakad, a manager at the Primary Cooperative Society in Dhundka village in the district. Nearly 10 officials in two vehicles reached Dhakad’s residence at 6.15 am and began raid.

Till filing of the report, the action was on. An official said details will be revealed only after investigation gets over. The local police force is also present outside Dhakad’s residence.

Insiders said Dhakad owns a house and agricultural land in Ladusa, his ancestral village. He has been posted as the committee manager in Primary Cooperative Society in Dhundka village for long.

Recently, Lokayukta police had received complaint against him that he owns assets that are disproportionate to his known sources of income. During preliminary investigation, the team found large amounts of cash, jewellery and property documents at his residence besides two tractors, one car, four two-wheelers.

Movable and immovable assets that were found at his residence are much more compared to his monthly salary and income he drew during his service tenure.