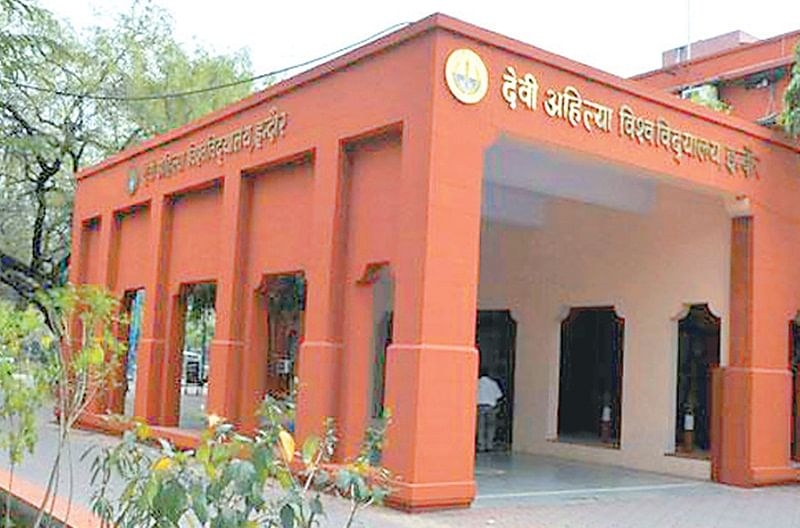 Indore (Madhya Pradesh): Devi Ahilya Vishwavidyalaya (DAVV) was at the centre-stage on Friday as activists of Congress, NSUI and ABVP staged protests on RNT campus of the university over the issue of allocating CET centres to Indore students in Bhopal and other districts.

Former chief minister Kamal Nath also urged Governor and Chancellor of state universities, Mangubhai C Patel to direct DAVV administration to setup centres for all CET applicants of Indore in their own city.

After news reports about around 6000 students from Indore being allocated centres in Bhopal and other remote districts were published in newspapers, Congress activists led by their state secretaries Tejprakash Rane and Anup Shukla reached DAVV raising slogans against university authorities.

They met vice-chancellor Prof Renu Jain and requested her to ensure that all CET applicants from Indore are allocated centres in their own city.

Jain informed them that it was not possible as more than 10,500 students from Indore had applied CET and National Testing Agency (CET), which has contract of holding CET-2021, does not have such a big infrastructure in Indore to accommodate all applicants.

She also said that the students knew beforehand that they can be given centres in other districts also if centres of Indore are filled.

Rane said that the university could not force students to travel to other cities for taking CET at the time of Covid-19 crisis and added that many of students have not even taken vaccine against coronavirus infection as they are below the age of 18.

Jain said that she would talk and convey their demand to NTA.

Congress state vice president Ajay Chordia also reached DAVV with message of Kamal Nath. He met registrar Anil Sharma and informed him that Nath is of a view that Indore students should be allocated exam centres in their own city. Sharma told Chordia that they would be talking to NTA over the issue. However, he also cleared that much is not in DAVV’s hand as NTA is entrance exam conducting agency for CET.

Nath tweets in favour of students

Nath tweeted in favour of students from Indore. His tweet read, “Thousands of students of Indore have been given CET centers at distant places like Gwalior, Morena, Jabalpur… In this crisis of corona, the government and university administration are playing with the future and lives of thousands of students with such a decision.”

His tweet added, “It is my request to the Chancellor and Governor in the interest of thousands of students should direct the university administration to keep the exam centres of the students of Indore in their own city.”

NSUI had heated exchanges with the vice-chancellor as she stated that she can try but can’t give and assurance that NTA will accommodate all CET candidates from Indore in local centres.

NSUI district president Amit Patel stated that the university had to ensure that Indore students are allocated centres in their own city else they will not let exam to be conducted at any place in the state. The university officers tried in vain to convince the activists that they should not give up their demand if NTA expressed its inability to all Indore students in local centres.

Around 5.15 pm, ABVP activists also reached the RNT Marg campus with the same demand. Vice-chancellor Jain told them that she is going to UTD campus to talk to CET organising committee members over the issue of Indore students being allocated centres in remote districts. But ABVP activists gheraoed her official vehicle saying that she should call organising committee members at her office instead. Irked Jain said that she did not require a car to go to UTD and started walking out of the campus.

NTA to reply by noon today

In the evening, Jain held meeting university officers wherein it was decided that the demand raised by the protestors be conveyed to NTA. The university informed NTA officials that allocation of centres to Indore students in other districts has taken a political colour. The university sought NTA’s help in dealing with the issue. NTA said that they would discuss the issue in meeting on Saturday and let what it could do by noon.