Waqf Board, Bhopal forwarded a letter demanding local SDM Himanshu Prajapati to carry out an investigation into properties, income-expenditure and appointments made at local level.
FP News Service 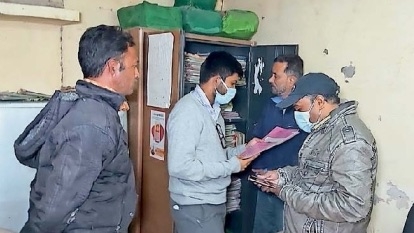 Jaora (Madhya Pradesh): Debate on who should take over the management of Hussain Tekri is still going on.

On Tuesday, Waqf Board, Bhopal forwarded a letter demanding local SDM Himanshu Prajapati to carry out an investigation into properties, income-expenditure and appointments made at local level. The sealed office was opened in the presence of the police and remaining documents seized.

On Tuesday, Shehar Kazi Hafiz Bhuru Bhaijaan submitted a memorandum to SDM in the name of Waqf board, Bhopal. The memorandum was supported by Seerat committee, Sunni Seerat committee, Ittefaaq committee, Taziya committee, Jamiyawul Qureshi Naujawan Intezamia committee, Young Blood group, Friends Group, Auto Union and Hussaini Bachha committee. In the memorandum, it is mentioned that formation of new committee is against clause number 6 of the registration, according to which Nawabís family should take over the management from one generation to another.

Members of Nawab family submit their claims to become Mutawwali

According to sources, many members of Nawab Family have submitted their claim by writing a letter to Waqf board, Bhopal, to become Mutawwali. Munawwar Gulrez Ali Khan, a member of Nawab family, said that, according to rules, family together decides the next Mutawwali but till now, they havenít arrived at any decision. Now the board will have to decide who will be the next Mutawwali.

On the said property, there are 213 rooms, 210 shops and one Al-Murtaza guest house that generate revenue of Rs 1.5 to Rs 2 crore per annum. The entire expenses, including annual Chehallum, are managed from this earning. This event has been taking place ever since the roads to Karbala were closed during World War II. Six per cent of the annual income is deposited to Waqf Board in form of monitoring of donations.

This is, probably, the only place in the country and the world where both Shias and Sunnis organise religious events together and people belonging to all religions, including Hindus and Muslim, have faith in this place. With efforts of MLA Dr Rajendra Pandey, a proposal for the necessary works to develop it as a tourist destination was also sent to the government a year ago.