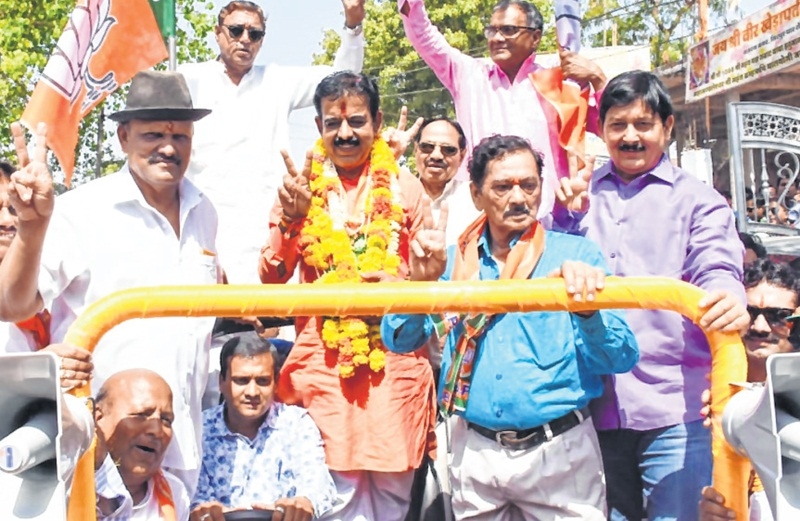 Indore: Though they did not bury their hatchet, BJP senior leader Satyanarayan Sattan and former MLA of Indore-1 constituency Sudarshan Gupta on Saturday came together to campaign for party candidate Shankar Lalwani for Indore Lok Sabha seat.  The duo leaders along with Lalwani and Indore-2 MLA Ramesh Mendola and party city president were seen on a jeep seeking votes for BJP.  Lalwani started his Lok Sabha election campaign from Indore-1 assembly constituency. After performing puja at Khedapati Hanuman temple in Sirpur area, the campaign was commenced.

People were surprised to see both Sattan and Gupta, who are not on good terms, were seen together after a long time. The fissures widened when Sattan opened front against eight-time MP Sumitra Mahajan stating that he would consider contesting LS election as independent candidate if party granted ticket to her for the ninth time.  Gupta is close to Mahajan, so the rift between duo widened with Sattan’s announcement.

BJP denied ticket to Mahajan due to age and fielded Lalwani from Indore. Initially, political pundits thought that neither Mahajan nor BJP general secretary Kailash Vijyavargiya would support Lalwani but political developments since then proved them wrong.  Unlike Congress, BJP is not only united but is fully supporting Lalwani. He is getting support of all factions of BJP in Indore. Sources said RSS wants BJP leaders to work in tandem so that Lalwani registers a major victory from Indore seat.