City sky remained partly cloudy, kept the day temperature at 41°C; The day temp had been hovering over 43°C for the past three days

Indore (Madhya Pradesh): With a western disturbance (WD) active over Iran and Afghanistan and a change in the wind pattern to northeasterly, the city got slight relief from the scorching heat as the day temperature dropped by 2 degrees Celsius on Saturday from what was recorded on Friday.

The city sky remained partly cloudy and kept the day temperature at 41 degrees Celsius, which had been hovering over 43 degrees Celsius for the past three days.

The weatherman said it was because the WD over Iran and Afghanistan had turned active that the western part of the state witnessed relief from the continuously rising temperature.

Hot winds blew at a speed of 15-20 kilometres per hour in the city in the afternoon which emptied the city’s roads.

Maximum temperature on Saturday was recorded at 41.6 degrees Celsius, which was 1 degree Celsius above normal.

‘No significant change in maximum temperature is very likely over north-west and central India during the next 2 days and it’ll fall by 2-4°C during the next 3 days. The temperature will remain around 40-41 degrees Celsius for the next couple of days and another spell of hot weather will start on May 19’

Indore’s weather in May

Indore experiences the peak of summer in this month when the highest temperature of the year is recorded. The surface wind is generally from the west and north-west. Sometimes, during the afternoon, the wind becomes strong and gusty adding to human discomfort. However, sometimes, rain associated with thunderstorms brings down the temperature and provides temporary relief.

The normal maximum temperature of 40.6°C at the beginning of May is maintained throughout the month. The normal minimum temperature rises from 24.0°C to 25.0°C. There are an average of 3-4 occasions of heat wave during this month.

May is one of the driest months in Indore. The average rainfall is 13.5 mm and the number of rainy days is 1.3. Thundershowers, which account for most of the wet spells during this month and bring in considerable relief from the summer heat, are primarily associated with local developments of heat—wind discontinuity and, sometimes, western disturbances moving across the country’s north. The mean frequency of occurrence of thunderstorms is 2.6 days in this month which are, generally, accompanied by squally winds. 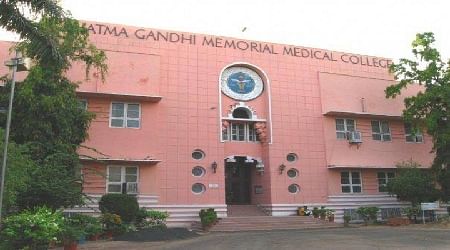