The deadline was Dec 15, 2021, but still no hope; State Archaeology Department bearing loss of revenue due to negligence by Smart City
ARSH RAFIK VISAAL 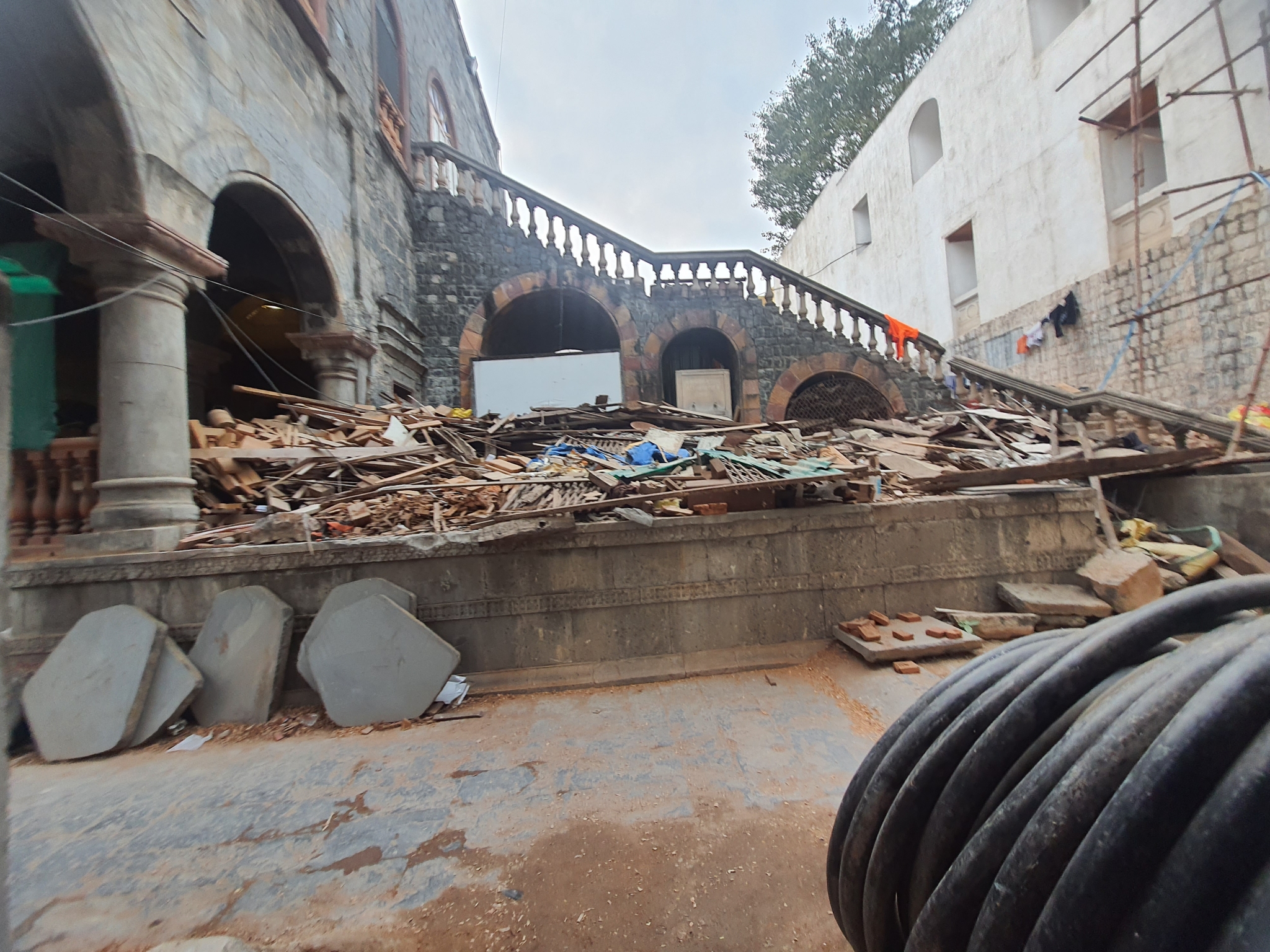 Indore (Madhya Pradesh): Indore’s pride, the Rajwada Palace, has turned into a junkyard in the past 5.5 years under the development agencies of the city concerned. The project is now under Indore Smart City Development Limited.

These five years of delay have indirectly affected the generation of revenue of the Department of Archaeology, Archives and Museums (DoAAM), Government of Madhya Pradesh, said officials of the department. The pride of every Indorean, the pride of the city since the Holkar Era, is in such a pitiable state now which the rulers who lived there would never have thought it would be. The process of turning into a junkyard started after the collapse of the north-west wing of the Rajwada Palace on July 5, 2016.

After the collapse, on May 29, 2017, a tender was floated by Indore Smart City Development Limited for Rs 19.92 crore for conservation, restoration and redevelopment of Rajwada (Phase 1) with a completion period of 24 months (estimated till May 2019).

On December 4, 2017 A team of senior officials of the district administration and Indore Municipal Corporation (IMC) inspected heritage buildings in the Gopal Mandir area where the civic body carried out demolition drive a day ago causing an effect on the heritage building.

On May 14, 2019 Indore Municipal Corporation (IMC) issued termination notice to a private agency engaged in conservation and restoration of Rajwada for failing to complete the work in time. With the notice, IMC also issued a penalty of Rs 2 lakh on the contractor.

On November 11, 2020 the urinals opposite the Rajwada palace were suspected to be the cause of the cracks occurring in the palace, said professor Dr Arum Menon, the invited wood expert from IIT-Chennai on his visit to Rajwada Palace on November 11 for inspection.

On June 10, 2021 The Indore municipal commissioner gave a deadline of October 15, 2021, to the officials to complete the renovation and restoration work of Rajwada Palace, which has been delayed for the past five and a half years. She held an inspection meeting, but the work has not been completed, so far.

On July 26, 2021 Indore Smart City Development Limited CEO Rishav Gupta gave a deadline of December 2021 to get the work completed, but till January 2022, much of the work is pending and the officials and workers there, on condition of anonymity, claimed it would take almost a year or a few more months for the entire work to get completed.

On August 13, 2021 At a review meeting by MP Shankar Lalwani, municipal commissioner Pratibha Pal said the work would be completed by December 15, 2021.

Officials said that, for restoration work, the Rajwada building was divided into six identifiable zones for the proposed makeover plan which included chemical cleaning, work on doors and windows, finishing work, restoration and stabilising of the existing structure and protecting the plinths

A Smart City officer, on condition of anonymity said, ‘The work is still on. There are many technical issues that the departments are facing. I can’t explain all of them over a call. We’re in contact with experts to restore the damage that occurred in the palace. The wood used in construction of the palace also got damaged. A large part of the palace is completed’

Officials of the department of archaeology, Archives and Museums (DoAAM) said, ‘We’re affected with a loss in revenue generation of lakhs of rupees as, since 2016, the palace isn’t open to tourist visits. We expect the work to get completed soon’

1. Lack of supervision by ISCDL

2. Lack of coordination between contract company and ISCDL

3. Lack of disbursement of payment within prescribed time

6. Increase in work of the palace because of its old infrastructure