First from MP: Indore's professor Ajit Upadhyaya among Most Influential in world in survey based on LinkedIn platform

In the survey, 75 top professors from the world were listed.
Tina Khatri 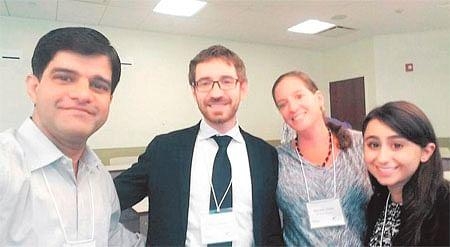 Indore: Making Indore and Madhya Pradesh proud and adding sparkle to city’s several achievements as an education hub, researcher and professor Dr Ajit Upadhyaya is among the most Influential Marketing Professors according to the list created by Mansur Khamitov, a professor at the Nanyang Business School University (NTU) in Singapore based upon an algorithm that mixes the number of followers, post, comments and engagement, active research, Insight sharing and ideas etc. on LinkedIn platform. He is first and only professor from Central India to make the list.

In the survey, 75 top professors from the world were listed. Among them, there were six professors from India namely Varsha Jain from Ahmedabad, Gujarat; Dr Ajit Patil from Mumbai, Maharashtra; Rajendra Srivastava from Hyderabad, Telangana; Ajit Upadhyaya from Indore, Madhya Pradesh; Sudhir Rana from New Delhi; and DD Swain from Khorda, Orissa.

From Central India, Upadhyaya is the only one to make the list. Sharing his journey of becoming the most influential marketing professors, he said, “We teach marketing to MBA (masters of business administration) students and without setting an example, we are not doing justice to them.”

He explained that marketing cannot be taught through books, rather must be applied. “Marketing is not a theory that one learns, it is an every-day dynamic of the market and now, we cannot ignore online marketing as an essential part of overall marketing,” Upadhyaya said.

Further, he discussed different aspects of marketing after Covid-19 outspread in one-on-one interview: According to its latest data shared by Centre for Monitoring Indian Economy (CMIE), an estimated 66 lakh white-collar professional jobs including those of engineers, teachers and physicians were lost between May and August dragging employment down to the lowest it has been since 2016.

In such times, Upadhyaya suggested, “To survive in white-collar positions, every professional needs to influence the market not just physically but also digitally.” He added that maintaining and forming relations in the virtual world can expand reach and act as a strength for a manager.

With Covid-19 outspread and financial constraints, markets have suffered losses. In such a situation, as a mentor to start-ups, Upadhyaya suggested, “It is essential to study the market and provide innovative solutions.” He gave an example of how android technology changed the scenario of smartphone market.

“By adopting what is needed like home deliveries, quick services, etc. in corona times, you can capture the market and win over traditional markets,” Upadhyaya said.