HomeIndoreAlot: School bars students from exam for not paying fees

Alot: School bars students from exam for not paying fees

According to the information, the half-yearly examination started at the school on Saturday

Alot (Madhya Pradesh): Many students of Shri Mahaveer Vidhyalaya, Alot failed to appear in their half-yearly exams after the school administration did not allow them to enter the exam hall for non-payment of school fees.

According to the information, the half-yearly examination started at the school on Saturday.

Many of the students and their parents who missed their exam claimed that the pressure is being applied on them to pay their fees. It is reported that the children are being warned daily to pay the fees immediately failing which they would not be allowed to sit in the exam.

On Saturday, the children who did not pay were barred from taking the exam. They were asked to deposit the fees immediately or to call the parents. On reaching the school, parents protested the decision of the school.

Meanwhile, an attempt to contact school principal Naveen Khetra failed repeatedly as he had switched off his mobile phone, while block education officer Dilip Sharma said that he don’t know anything as he in Ratlam to attend a departmental meeting.

Sharma admitted that if this is going on, it is against the norm and the department will take action against the school. He added that he will look into the matter and serve notice to the school as well. 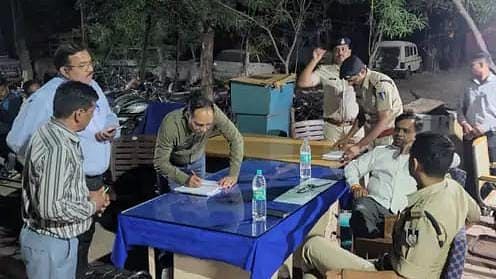