Advertisement
Home / India / Yasin Malik pleads guilty in 2017 terror case: Here's all you need to know about the case

Yasin Malik pleads guilty in 2017 terror case: Here's all you need to know about the case

Here's what you need to more about the case:

In March 2019, the National Investigation Agency (NIA) registered an FIR against the separatist leader for raising, receiving and collecting funds through various illegal means, including hawala transactions, for funding separatist and terrorist activities in Jammu and Kashmir and for causing disruption in the valley by way of pelting stones on the security forces, burning schools, damaging public property and waging war against India.

NIA in its investigation report, had accused Yasin Malik of receiving money through Kashmir-based hawala operators to fuel unrest in the valley. The funds would come from Pakistan, including terror groups such as the LeT.

NIA further added that during the investigation, it was also revealed that APHC and other secessionists instigate the general public, especially the youth to observe strikes and to resort violence especially stone pelting on the security forces. This was done to create disaffection amongst the people of J-K towards the Government of India.

Malik did not have a lawyer in this case. The amicus curaie appointment by the court has confirmed that the accused was not contesting the charges levelled against him, including under UAPA.

In March 2022, the court framed charges against Malik along with Shabir Shah, Rashid Engineer, Altaf Fantoosh, Masrat and Hurriyat/Joint Resistance Leadership (JRL) for being direct recipients of terror funds.

Before 2014, he was being projected as the messiah of peace. He was seen as an important stakeholder in the establishment of peace in J&K among the top brass in Delhi’s power circles.

It was despite that fact that he had openly admitted to the killing of Kashmiri Hindus and four unarmed IAF officers.

After his arrest, in 2019, former CM of J&K, Farooq Abdullah hailed the terrorist for “choosing death over bowing before New Delhi”. 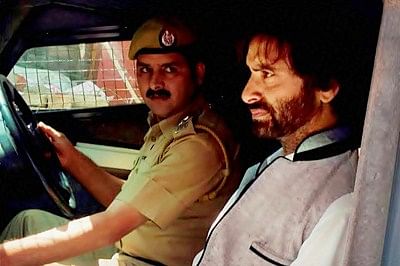