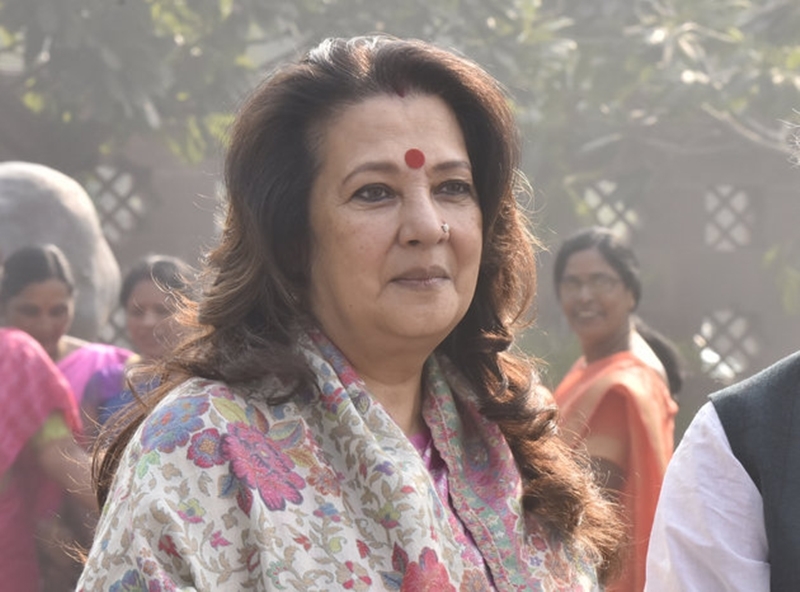 Asansol: Veteran actress Moon Moon Sen says she is in politics to win people’s love and feels donning a politician’s hat has been easier for her as there is far less amount of mudslinging compared to the film industry.

The 64-year-old Oxford alumnus, who is fighting the 2019 polls from West Bengal’s Asansol parliamentary constituency on a Trinamool Congress ticket, says she would be “delighted” if West Bengal Chief Minister Mamata Banerjee becomes the next Prime Minister.

Sitting in the lobby of a plush hotel on National Highway 2 on the outskirts of Asansol city, Sen, draped in an elegant white saree and a flower bouquet in her hand, talked to IANS after two-and-half hours of a gruelling evening campaign, where she was accompanied by her daughters Raima and Riya. “I am not a full-fledged politician. But I can say there cannot be more mudslinging than there is in the film industry.

There it is cut-throat, it is soul destroying. This is easy compared to all that,a said Sen, the daughter of Bengali screen legend Suchitra Sen. Sen, a former school teacher, said she would focus on environmental issues to control Asansol’s pollution and work on improving health care if the people elected her.

“I am here to win some votes and do my work which, let’s say, is away from politics. I am in politics to win peopleaÂ¿s love. If I become an MP again, I would like to work on improving the environment and providing better medical care. There is a shortage of doctors and nurses all over the world,” she said.

Talking at length on pollution issues in the area, she said children and women were choking due to the coal mines and black furnaces all around. “Their lungs are being affected. It is taking a toll on people in general and is life threatening for pregnant women. The district magistrate said the local administration has started planting trees,a she said.

Sen, who had pulled off a surprise victory five years ago in Bengal’s Bankura where he handed out a shock defeat to nine time CPI-M MP Basudev Acharia, has been shifted to this coal belt constituency bordering Jharkhand this time. But she is not bothered by the opposition’s allegations that she is an outsider unaware of the core-problems in Asansol. “I am not concerned about what the opposition says. I do not plan to justify myself to them either. There is no room for negativity in my life.

“At the moment I am involved in planning to win an election. I know I will figure out things slowly on my own. I will do what I can, within my capacity but there are certain issues, things which would be tackled by the state government and the centre. So there is no point in boasting and saying I am going to fix everything,” said Sen, conceding that people had told her before she came to the constituency that she could lose as it was a BJP bastion.

“I have never lost in politics. I have people’s support with me. I know that once I am committed, I have to do my duty. If I win, I win. If I don’t win I have still done my best. That’s what I am focusing on. If I win here, I will be delighted,” she said adding she is much better prepared this time compared to the 2014 polls.

Sen, who has acted in numerous Bengali, Hindi and South Indian films in her career spanning over three decades also welcomed the entry of two more Bengali actresses, Mimi Chakraborty and Nusrat Jahan, into politics and said the parties should look to bring in more young and energetic faces with “bright new ideas”.

“I do not see why the parties should not now bring in more young and glamorous people from other spheres. Most of them are intelligent enough to let them be guided and do the work they’re supposed to do,” Sen said. Expressing her love and admiration for Banerjee, she said the Trinamool Congress supremo inspired her to join politics through her “work ethics and tremendous devotion towards people”.

“IaÂ¿ll be delighted if she becomes the Prime Minister. We know who all are in contention. This lady has been a long time MP, a central minister and now a chief minister for eight years. Also she is quick to point out a crisis and take steps to solve it. She is the one who first talked about the Mahagatbandhan (grand alliance). People across the country are recognizing her potential today.

“You can’t take West Bengal away from her (Banerjee). I know nothing about the politics in Delhi and what might happen if the opposition alliance wins but I know that people across the country are suffering due to demonetisation and GST. Many have had to close down their businesses,” she said.

When asked whether she is still in touch with Pakistan Prime Minister Imran Khan who used to be her classmate in Oxford, Sen said though she has not spoken to him since he took over the hot seat, she assumes their friendship is still intact.”I haven’t talked to him since he became Prime Minister. I haven’t met him recently either. But I assume we are still friends. Imran is often quoted as saying he has a number of friends in Kolkata,” she signed off.