Police vehicles and booths were set on fire by protestors in West Bengal's Howrah on Friday after protests over the controversial remarks on Prophet Muhammad by suspended Bharatiya Janata Party (BJP) spokesperson Nupur Sharma turned violent.

Hundreds of protesters blocked roads in different parts of Howrah district, police said. The agitators clashed with police personnel at Dhulagarh, Panchla and Uluberia when they tried to lift the blockade on National Highway-6, they added.

"The two saffron party leaders should be immediately arrested for their remarks that have hurt religious sentiments," one of the protesters said.

Police had to baton-charge to disperse the crowd at Dhulagarh and Panchla, where the demonstrators pelted stones in retaliation, causing damage to nearby cars, the officer said.

The protesters also blocked railway tracks between Fuleswar and Chengail stations in the Howrah-Kharagpur section from 1.22 pm, a South Eastern Railway official said.

Bengal Imams Association president Md Yahia said it had called for protests inside mosques across the state, demanding the arrest of the two BJP leaders, but said the administration is free to take action against people who are blocking roads and inconveniencing the public.

Meanwhile, massive protests erupted in several parts of the country today including Delhi, West Bengal and Uttar Pradesh over remarks by Sharma and her former colleague Naveen Jindal that have triggered an international row. 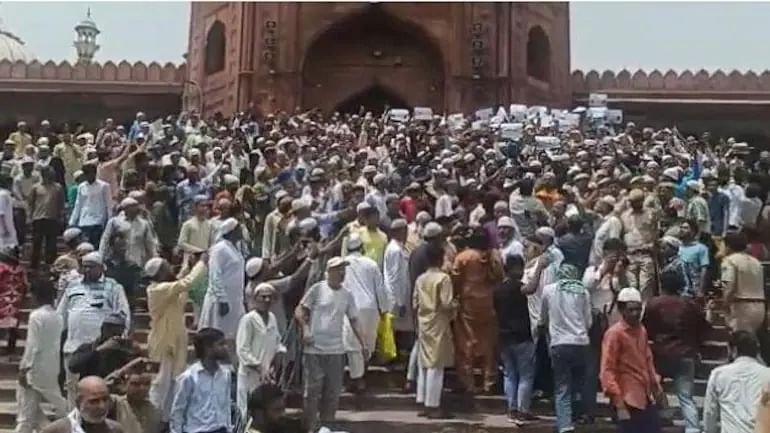