At the devasted Tapovan power project site rescuers worked nonstop even as the odds of finding the trapped workers alive seemed slim.

A rescue operation continues after the glacier burst at Tapovan Tunnel, in Chamoli on Friday | ANI

The confirmed death toll in Sunday's flash flood in the Alaknanda river system in Uttarakhand's Chamoli district climbed to 38 after the recovery of two more bodies and 166 people still remain missing.

Only 12 of the recovered bodies have been identified while 26 remain unidentified, Chamoli District Magistrate said.

At the devasted Tapovan power project site rescuers worked nonstop even as the odds of finding the trapped workers alive seemed slim.

Upset over the pace of the rescue work, anxious family members of the missing workers shouted slogans near the National Thermal Power Corporation (NTPC) site.

Apart from clearing the sludge with heavy machinery, rescue agencies were simultaneously trying to drill their way through another tunnel to reach them.

"It may be the sixth day after the calamity but we have not lost hope and will try our best to save as many lives as we can," Uttarakhand DGP Ashok Kumar told PTI.

NTPC Tapovan general manager R P Ahirwal said the work of drilling to the silt flushing tunnel where the men are believed to be trapped was being conducted "successfully".

On Friday morning, officials said the sludge up to 114 metres had been cleared and drilling work is also on to reach the silt flushing tunnel where the workers may be trapped. 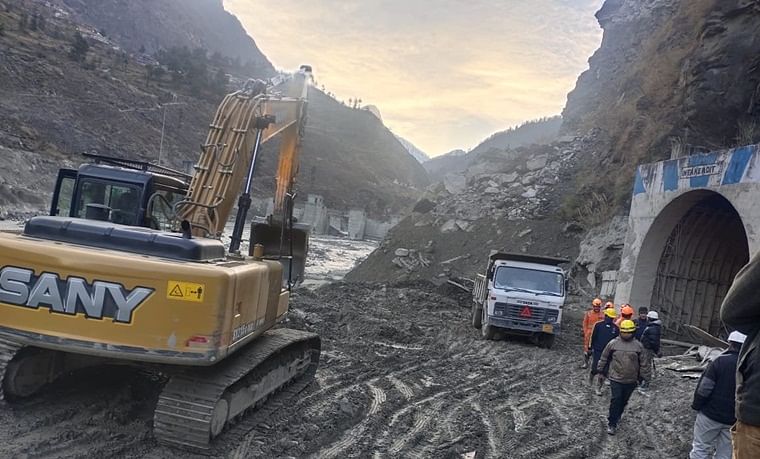 Family members of those missing remained upset with the progress of the rescue work. A group from the Tapovan gram sabha shouted slogans against the state government and the NTPC. Tapovan's former pradhan Dharmpal Bajwal said four people from his village are missing and their families are now losing patience.

"First we lost our fields and now we are losing our men. The project is a curse on us. It is the sixth day and the sludge has not been cleared up to even 200 metres inside the tunnel," Deveshwari Devi said.

CISF personnel at the site stopped the protesters 100 metres from the mouth of the tunnel.

One of the bodies recovered Friday was found in Maithana and the other in the rubble at the devastated Rishiganga hydel project in Raini, officials said.

A separate team of rescuers was formed under the supervision of an executive engineer to speed up the search operation with the help of local people and old photographs of the Raini project.

The exact cause of the flash flood which ripped through two hydel projects is not clear, but it may have been triggered by an avalanche.

Formation of temporary lake cause concern

Experts were trying Friday to determine if a temporary lake formed upstream by an avalanche could breach its banks and threaten the rescue work at the sludge-choked Tapovan tunnel, where 25-30 people are feared trapped.

A report by the Wadia Institute of Himalayan Geology says that the debris brought by it has blocked a stream that joins the Rishiganga, leading to the formation of a temporary lake.

If breached, the new lake could cause further damage in the valley, the report said. The Central Water Commission also confirmed the formation of a 350-metre long "artificial lake".

Satellite pictures suggest it is at the confluence of Raunthi Gad and Rishiganga.

Chief Minister Trivendra Singh Rawat said its depth is not known. He urged people not to panic but exercise caution.

The Chamoli district administration issued an alert asking people to avoid going to the banks of the Rishiganga after sunset.

An eight-member team of the scientists from the Geological Survey of India is being sent to the lake and submit its report at the earliest, Chamoli District Magistrate Swati S Bhadauria said.

A team of Wadia Institute scientists conducted an aerial survey of the upper reaches of the Rishiganga just a day after the Sunday's avalanche and spotted the new glacial lake there.

It seems that the recent avalanche has led to its formation in the higher stretches of the river's catchment area, Institute director Kalachand Sain said.

"Our scientists are examining the size of the lake, its periphery and the volume of water it contains to ascertain how big and immediate the danger from it is," Sain told PTI.