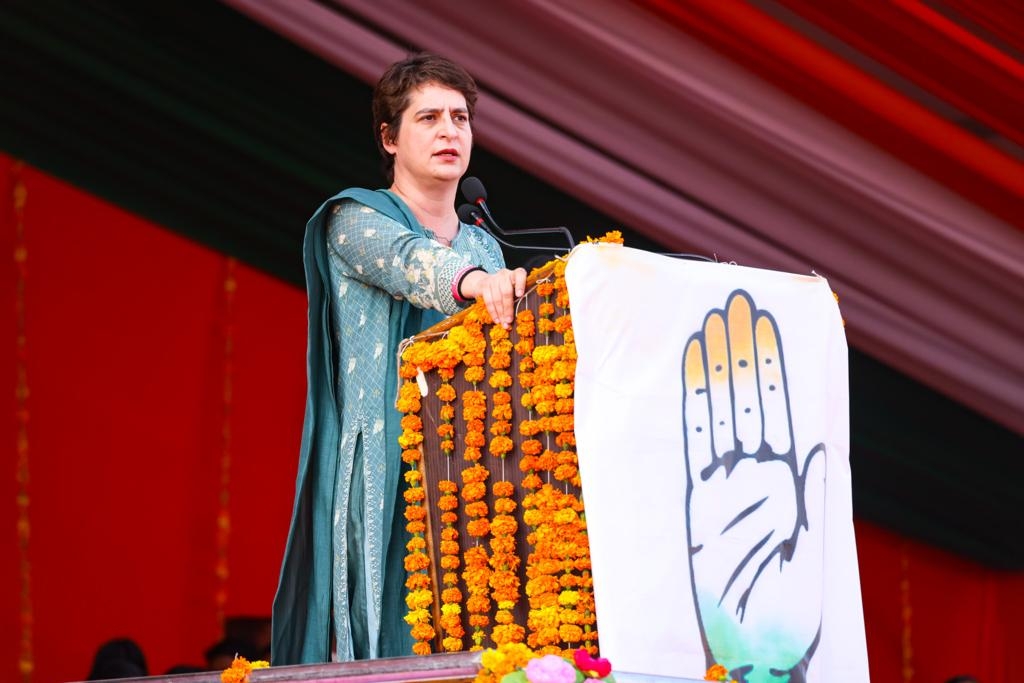 Lucknow: Promises continue to ooze out of Priyanka Gandhi’s kitty for the poll-bound Uttar Pradesh. After holding massive rallies in eastern and west UP, Congress general secretary and in charge of UP, Priyanka Gandhi on Saturday was in Mahoba, Bundelkhand.

In her first poll meeting at Bundelkhand, she reminded people of the miseries they have been facing in the present government.

Beginning her speech in local dialect by greeting people, she remembered local heroes Aalha-Udal, Rani Lakshmi Bai, Maharaja Chattrasal, Deewan Hardaul, noted poet Maithli Saran Gupta and Swami Brahmanand Mahraj. Reminding people of her last visit to Lalitpur, Bundelkhand to meet the family of farmers who lost their lives while standing in queue for fertilizers, Priyanka said a large number of people have taken debt for agriculture and cannot repay. Farmers here are not getting proper price for their produce and there is no water for irrigation.

Congress general secretary said that the farmers' income has reduced to Rs 27 daily now while recently the Prime Minister visited Jhansi in a new aircraft of Rs 8000 crore. The industrialist friends of PM earn Rs 10000 crore daily but he refuses to waive loans of poor farmers.

Priyanka Gandhi said that if Congress comes to power the entire loan of farmers would be waived off. She said that earlier also, Congress had waived loan of farmers in the entire country worth Rs 72000 crore. She reminded them of her promises of giving 50 per cent rebate in the electricity bill and full waiver of bills during the Covid time. She said that the Chhattisgarh model would be implemented to tackle the problem of stray cattle. Besides if voted to power Congress government would give employment to 20 lakh youth and free medical treatment of Rs 10 lakh to all.