Prime Minister Narendra Modi reached Uttar Pradesh on Thursday morning to inaugurate multiple projects. He was received at the Varanasi airport by Governor Anandiben Patel and Chief Minister Yogi Adityanath and other dignitaries.

"Tomorrow, 15th July, I will be in Kashi to inaugurate a wide range of development works worth over Rs. 1500 crore. These works will further 'Ease of Living' for the people of Kashi and Poorvanchal," he had tweeted ahead of his visit on Wednesday.

As the inauguration ceremonies began, the Prime Minister took to Twitter sharing a video link for the proceedings. "Kashi is becoming a large medical hub of Purvanchal. Today facilities are being made available in Kashi too for diseases for the treatment of which one had to go to Delhi and Mumbai earlier," he said.

"Under PM Modi's governance, Kashi has made a new identity in country & world. New Kashi is reaching new heights in development. This smart Kashi has become a model for the country and world," said Chief Minister Adityanath.

According to the Prime Minister's Office (PMO), projects worth around Rs 744 crores will be inaugurated. He is inaugurating various public projects and works, including a 100-bed MCH wing in BHU, multi-level parking at Godauliya, Ro-Ro vessels for tourism development on River Ganga, and a three-lane flyover bridge on the Varanasi-Ghazipur Highway.

"I am delighted to be inaugurating a convention centre Rudraksh in Varanasi. Constructed with Japanese assistance, this state-of-the-art centre will make Varanasi an attractive destination for conferences thus drawing more tourists and businesspersons to the city," he had tweeted on Wednesday.

I am delighted to be inaugurating a convention centre Rudraksh in Varanasi. Constructed with Japanese assistance, this state-of-the-art centre will make Varanasi an attractive destination for conferences thus drawing more tourists and businesspersons to the city. pic.twitter.com/ExoBLO6sp3

Modi will also lay the foundation stones of several projects and public works worth around Rs 839 crores. These include the Centre for Skill and Technical Support of Central Institute of Petrochemical Engineering and Technology, 143 rural projects under Jal Jeevan Mission and mango and vegetable integrated packhouse in Karkhiyanv.

At around 2 PM today, he will inspect the Maternal and Child Health Wing, BHU. He will also meet with officials and medical professionals to review Covid preparedness, the PMO said. 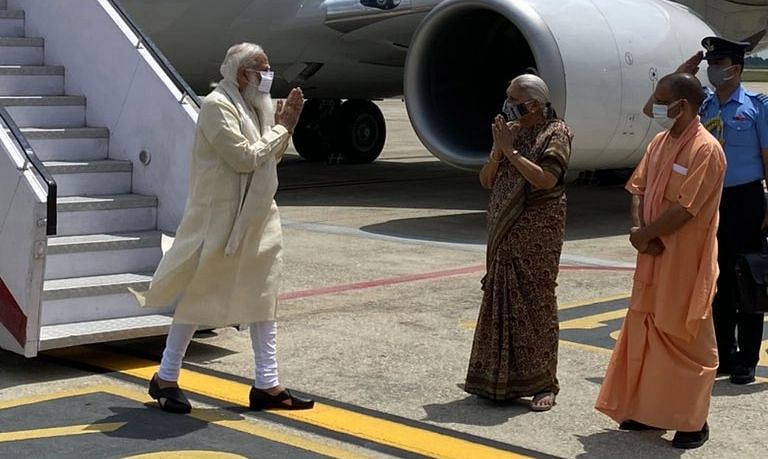