Additional Commissioner of Police, East Zone, Qasim Abidi, said that an FIR has been registered under the charges of the SC and ST Prevention of Atrocities Act, and other sections

Lucknow: In a shocking incident, a customer in state capital Lucknow made casteist slur on a Zomato food delivery man, allegedly thrashed and abused, and then spat on his face, police said.

The incident took place when the delivery man went to deliver to the customer, who asked him his name.

On hearing the delivery man's name, the customer refused to accept the order from an 'untouchable'.

An FIR has been registered on the complaint of the victim, Vineet Kumar.

Additional Commissioner of Police, East Zone, Qasim Abidi, said that an FIR has been registered under the charges of the SC and ST Prevention of Atrocities Act, and other sections.

Abidi added that CCTVs in the area are being scanned to trace the accused.

"Probe has been given to the ACP Cantonment who would record statements of both the victim and accused on Monday," he said.

According to Kumar, he was asked to deliver an order at a house on Saturday evening.

Kumar said that the buyer came out of the house and asked his name and caste.

"On getting to know that I belonged to a Scheduled Caste, he used casteist remarks, saying he will not take the order from the hands of an untouchable. I told him to place order cancellation if he did not want to accept the order," Kumar alleged in his complaint to the police.

He also alleged that the accused spat at his face and thrashed him with 10-12 persons, who came out of his house.

"They also took my motorcycle. I dialled the police control room, and a team reached the spot. The police helped me in getting back my motorcycle" he alleged in the FIR.

Kumar said that he has been working with the food delivery company for the past four years and has never faced such a situation earlier. 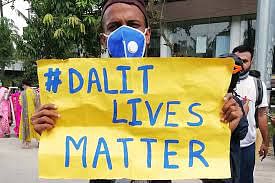