Uttar Pradesh: Ahead of assembly polls, PM Modi to visit twice and Amit Shah 7 times in next 10 days 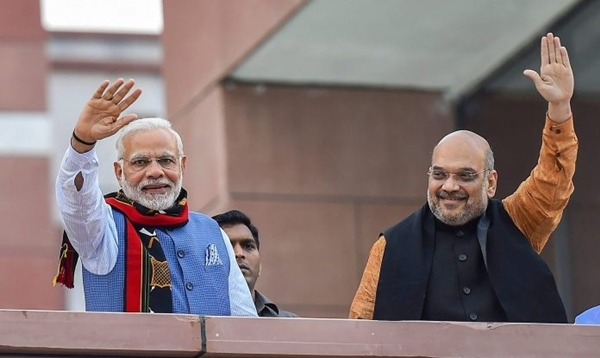 In Poll bound Uttar Pradesh, ruling Bhartiya Janta Party (BJP) is striving hard to regain power. In this quest, its two most powerful leaders Prime Minister Narendra Modi and home Minister Amit Shah have been making frequent visits of UP addressing rallies one after another.

In the remaining ten days of this month while the Prime Minister would visit UP twice, the Home Minister Shah is likely to address seven rallies. On Thursday the PM Modi will visit Varanasi again which would be his third in a row. The PM would be laying foundation of a milk-processing unit at Varanasi. Besides he would be dedicating and laying foundations of developmental projects worth Rs 2100 crore for Varanasi which happens to be his parliamentary constituency also. The milk processing unit of Amul with a daily capacity of 5 lakh liture, being set up at Varanasi would benefit 1.7 lakh milk producers in the region. The PM on this occasion would also distribute bonus of Rs 35 crores to the 1.7 lakh milk producers.

On December 28, PM Modi would visit Kanpur to launch various programmes and inaugurate projects. He is also expected to flag off the Kanpur Metro on that day. The trial run for Kanpur has already begun last month. Earlier on Tuesday, Modi was in Prayagraj to interact with women self-help group and other female workers in various government schemes. On December 18, PM had laid foundation of country’s longest Ganga Expressway and dedicated Kashi Vishwanath Corridor on December 13.

Besides PM Modi, there would be seven visits of Home Minister Amit Shah to UP in the coming ten days beginning from December 24. During these visits, Shah would cover 140 assembly segments addressing 21 public meetings and taking out three roadshows. Shah’s UP tour will begin from Prayagraj on December 24 where he would address a huge rally. The Home Minister would do roadshows in Ayodhya, Gorakhpur and Bareilly. In Ayodhya Shah would offer prayers at Ram Mandir first and then participate in the mega roadshow of BJP.

According to a senior state BJP leaders, before the model code of conduct for assembly polls is being imposed, there would be at least dozen programmes of both these leaders in UP. A grand rally of Prime Minister has been planned for Lucknow also which would be organized in the second week of January.

Uttar Pradesh: 16-year-old girl raped by 2 men, while another shot at over family dispute in...