The Congress interim president, who was questioned for 2.5 hours before lunch and rejoined after a break, had reached the ED office in central Delhi around 11 am.

New Delhi: Congress chief Sonia Gandhi was questioned for six hours today by the Enforcement Directorate in an alleged money laundering case connected to the National Herald newspaper. She has been summoned again tomorrow, according to news agency ANI.

The Congress interim president, who was questioned for 2.5 hours before lunch and rejoined after a break, had reached the ED office in central Delhi around 11 am accompanied by her Z+ armed security and her children Rahul Gandhi and Priyanka Gandhi Vadra.

While Priyanka Gandhi stayed back with her, Rahul Gandhi left soon after and joined the Congress protest at Vijay Chowk before being detained by the police.

The 75-year-old Congress president left the ED office around 2 pm and returned around 3.30 pm, officials said.

Sonia Gandhi's questioning and recording of statements began around 11.15 am after initial formalities, including the verification of summons and signing the attendance sheet, were completed.

She was questioned for over two hours on July 21. She replied to 28 questions put forth by the agency, according to PTI.

The questioning of the Gandhis pertains to the charge of alleged financial irregularities in the Congress-promoted Young Indian, which owns the National Herald newspaper.

The Congress has slammed the agency's action against its top leadership and termed it "political vendetta".

Delhi Police deployed a huge force, including CRPF and RAF personnel, and barricaded the entire over one kilometre stretch between her residence and the ED office. Traffic restrictions were also imposed in the area. 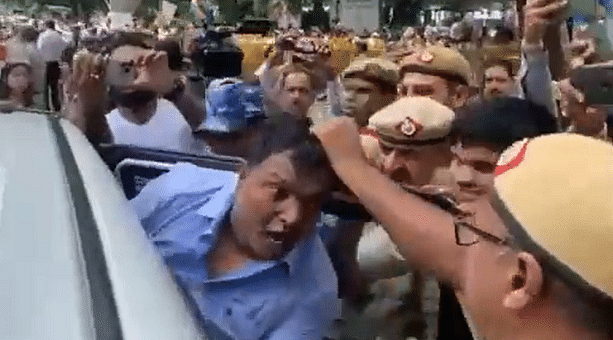