HomeIndiaRivaba Jadeja: 'It is not first time that two members of family are associated with two different ideologies'

Rivaba Jadeja: 'It is not first time that two members of family are associated with two different ideologies'

She said that her husband Ravindra Jadeja supports her in her move and that it is only a matter of difference in ideology.

Jamnagar: Amid speculation of differences in the Jadeja family ahead of the Gujarat Assembly polls, BJP candidate Rivaba Jadeja on Wednesday clarified that it is only a matter of ideology in the family.

BJP has fielded Rivaba, wife of cricketer Ravindra Jadeja from the North Jamnagar seat. Her sister-in-law Naynaba Jadeja, who belongs to the Congress party, was seen campaigning for her party candidate from the seat. Rivaba's father-in-law was also seen joining Naynaba in the campaign, in which he appealed to the people to vote for the Congress candidate.

After the video emerged, speculations were rife regarding differences in the Jadeja family.

However, Rivaba, in whom the BJP reposed faith in these elections, denied any such speculations and said that her husband Ravindra Jadeja supports her in her move and that it is only a matter of difference in ideology.

Speaking to ANI, Rivaba said, "It is not the first time that two members of a party are associated with two different ideologies. He is speaking as a worker of another party and not as my father-in-law. It is his personal matter. I believe in the people of Jamnagar. Jamnagar has given us numerous things. My husband was born here, he started his career here." She said that her father-in-law, who is seen seeking votes for the Congress candidate in the video, is doing it in a personal capacity and as a worker of another party.

My father-in-law is appealing as worker of party

"The appeal that my father-in-law is doing in the video, they are not doing it as my father-in-law, or my sister-in-law, but as the workers of another party. They have certain ideologies as workers of another party. There is nothing wrong with it. They are working for their own party and I am working for my own. There is no possibility of differences between us, there is only a difference in ideology," Rivaba said.

When asked if it is difficult for her husband to deal with two ideologies in the same family, she said that Ravindra supports her in her move.

"How difficult is it for Ravindra Jadeja with two ideologies: I and he are not two people, we are one. Our thinking is one and have same ideology. We complement each other. There is no confusion in this. We are very sure about what to do in life and what not to do," she said.

There is no confusion in the family

"There is no confusion in the family. It is only a matter of ideology," Rivaba added.

Earlier, on being asked about the possibility of a tripolar election in Gujarat and Aam Aadmi Party's chances in Gujarat, Rivaba refuted any such possibility.

Earlier, Indian cricketer Ravindra Jadeja said that his wife wanted to follow the path of Prime Minister Narendra Modi to work for the people and she would learn a lot from her first-time candidature in the assembly elections.

It is her (Rivaba Jadeja) first time as an MLA candidate

"It is her (Rivaba Jadeja) first time as an MLA candidate and she will learn a lot. I hope she will progress in this. She is of helping nature and has always wanted to help people and hence joined politics. She wants to follow the path of PM Modi to work for the people," the cricketer said.

Jadeja urged the people of Jamnagar to vote for his wife Rivaba Jadeja.

The Assembly elections in Gujarat are scheduled for two phases on December 1 and December 5. In the first round, 89 of the total 182 Assembly seats will go to polls and prominent political parties have declared their candidates for almost all these constituencies.

The BJP has been in power in Gujarat for the last 27 years and it is considered a BJP bastion. 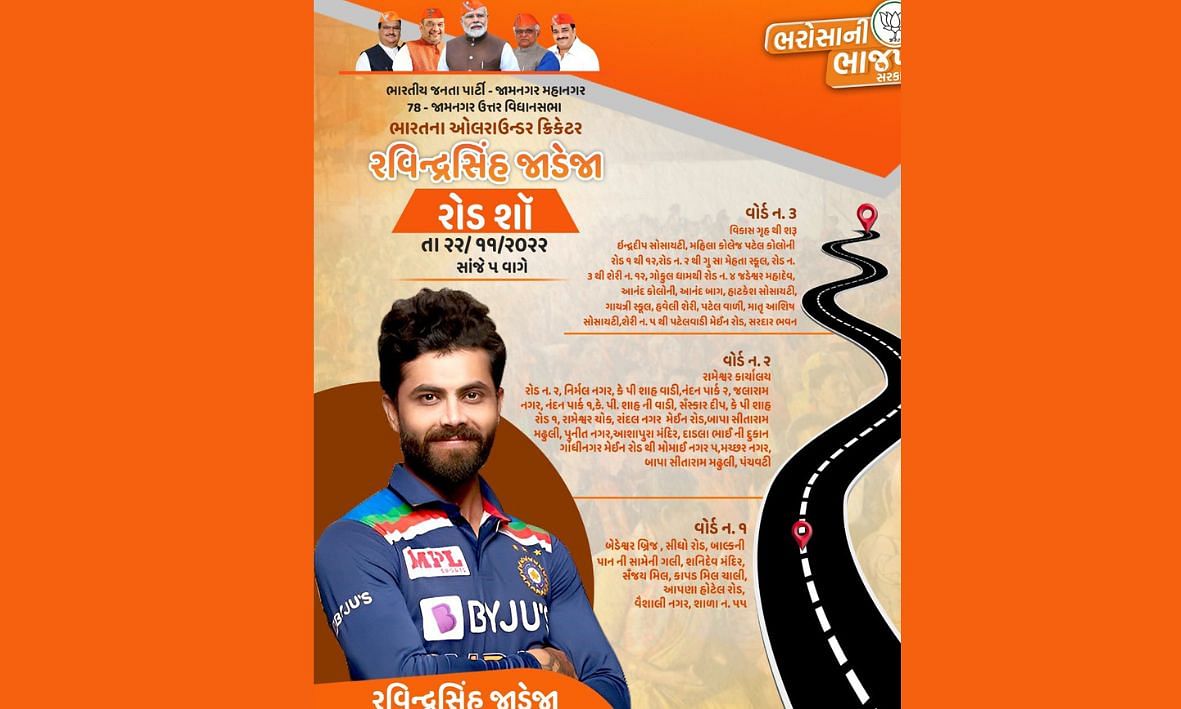