While one understands the reason, Congress gets misty-eyed about Rajiv Gandhi – remembering a time when they were the ones with the biggest mandate – young people of the current generation should know that beatifying Rajiv Gandhi shows a level of ignorance about the Indian polity.

Rajiv Gandhi, victim of Sikh pogrom, a child's body in Bhopal and Shah Bano | Wiki Media Commons
Follow us on

Nostalgia is a strange thing. When we put on graduation goggles, one tends to forget the evils gone by.

For example, those who criticised CJI Dipak Misra are suddenly nostalgic about his tenure when compared to Justices Gogoi and Bobde.

Aforementioned nostalgia also exists among those who vehemently hate the ruling party. The Modi tenure has liberals longing for the days of yore when Atal Bihari Vajpayee was PM.

One wonders if some day Yogi Adityanath, becomes the PM, will there be the same level of hand-wringing for the ‘liberal era of the Modi govt’?

To paraphrase Barney Stinson, ‘new is always worse’, which means that we end up diluting tyrannies of previous regimes when presented with new ones.

While one understands the reason, Congress gets misty-eyed about Rajiv Gandhi – remembering a time when they were the ones with the biggest mandate – young people of the current generation should know that beatifying Rajiv Gandhi shows a level of ignorance about the Indian polity.

Just because one doesn’t like the BJP – and there are enough reasons not to like the saffron party; from their brazen support of communalism to economic incompetence – one doesn’t have to beatify others.

Yet that was the case, when film director Apurva Asrani, remembered Rajiv Gandhi as a ‘gentle soul who respected women and had a beautiful vision of India’.

Thankfully, Asrani adds that his understanding of politics was ‘poor’, which is perhaps the only part of his statement dealing with factual exactitude.

The ‘respect women’ line is quite a kicker and while Rajiv Gandhi might have sounded like a perfectly good guy – when he wasn’t justifying genocide – his tenure opened a can of worms that continue to haunt India till this day.

Whatever his vision of India, Rajiv’s legacy left India in tatters.

The proverbial Pandora’s box of many ghosts that continue to haunt modern India – minority appeasement, defence scams, temple politics and more were opened during his tenure.

The Gandhis and Reagans | WikiMedia Commons

Such is his record, that criminalising marijuana – under pressure from Regan administration and its ill-fated war on drugs – is his least heinous offence!

So, since our millennials – bred on TikTok vs YouTube – might not be aware, here’s a little history lesson on some of Rajiv Gandhi’s biggest mistakes. Scenes from the Sikh pogrom of 1984 | Wikimedia Commons

Long before there was the puppy comment, Rajiv Gandhi raised justification of pogroms to an art form by stating: “When a big tree falls, the earth shakes.” He was referring to the 1984 Sikh pogrom and justifying a pogrom which took anything between 8,000 and 17,000 lives across the country.

Gandhi’s statement is still on tape, and it jars every time one considers that the death of thousands was justified so brazenly. While millennials would’ve grown up on tales of Nirav Modi and Vijay Mallya, Warren Anderson’s great escape takes the cake.

In 1984, the Bhopal Gas tragedy took place which claimed thousands of lives. Union Carbide’s CEO Warren Anderson had arrived in India after assurances were made that he’d not be arrested, he was taken into custody.

While the phone call didn’t help Mr. Anderson in The Matrix, it did help Warren Anderson who reportedly managed to get in touch with contacts in the US who ostensibly put pressure on New Delhi.

Moti Singh, erstwhile Bhopal collector said: “Had we removed the landline phone from his room, Anderson would not have escaped. He possibly made calls to contacts in the US to help him leave India.”

The former MP CM Arjun Singh claims that he got a call from RD Pradhan, on instructions from erstwhile Home Minister PVN Rao. While words in the corridors of power suggested Anderson was let go after pressure from Uncle Sam, there were no records of Rajiv Gandhi’s phone calls after the disaster. Anderson promised to return to stand trial, but the US refused to extradite citing lack of evidence. He died in Florida in 2014.

Mistake 3: Intimidation of the Press

In April 2018, the Modi govt. was forced to withdraw a circular issued by the I&B Ministry stating that if a journalist was found ‘propagating’ fake news, his press accreditation would be at ‘risk’.

Rajiv Gandhi actually went a step further than ‘fascist’ Modi but failed when he tried to pass an anti-defamation bill to muzzle the press in 1988. It was precipitated by severe criticism of India’s first proper defence scam – Bofors.

However, Rajiv Gandhi was met with vehement opposition from a united press, who were joined by lawyers, union traders and others, perhaps because the memories of the Emergency were still fresh.Even senior Congress leaders were opposed to the bill and Gandhi had to relent.

To add insult to injury, one of his bete noires of that era, Arun Shourie even went on to call him ‘his best circulation manager’.

Many Congress social media posts today hailed Rajiv Gandhi – like his son Rahul famously repeated the word ad nauseam at an interview – as a champion of women’s empowerment. It’s ironic given what he did in the Shah Bano case passing a law overturning the SC’s judgement and laying the seed for the appeasement tag.

While the SC ruled that Shah Bano should get alimony, The Muslim Women (Protection of Rights on Divorce) Act, 1986 overturned the SC judgement, giving in to fundamentalists who said that SC’s judgement wasn’t Sharia compliant.

It’s ironic he did it in 1986, when Congress had won 404 seats and became one of two incidents used to beat up the party, the other being PM Manmohan Singh’s statement about Muslims having ‘first claim to resources’. 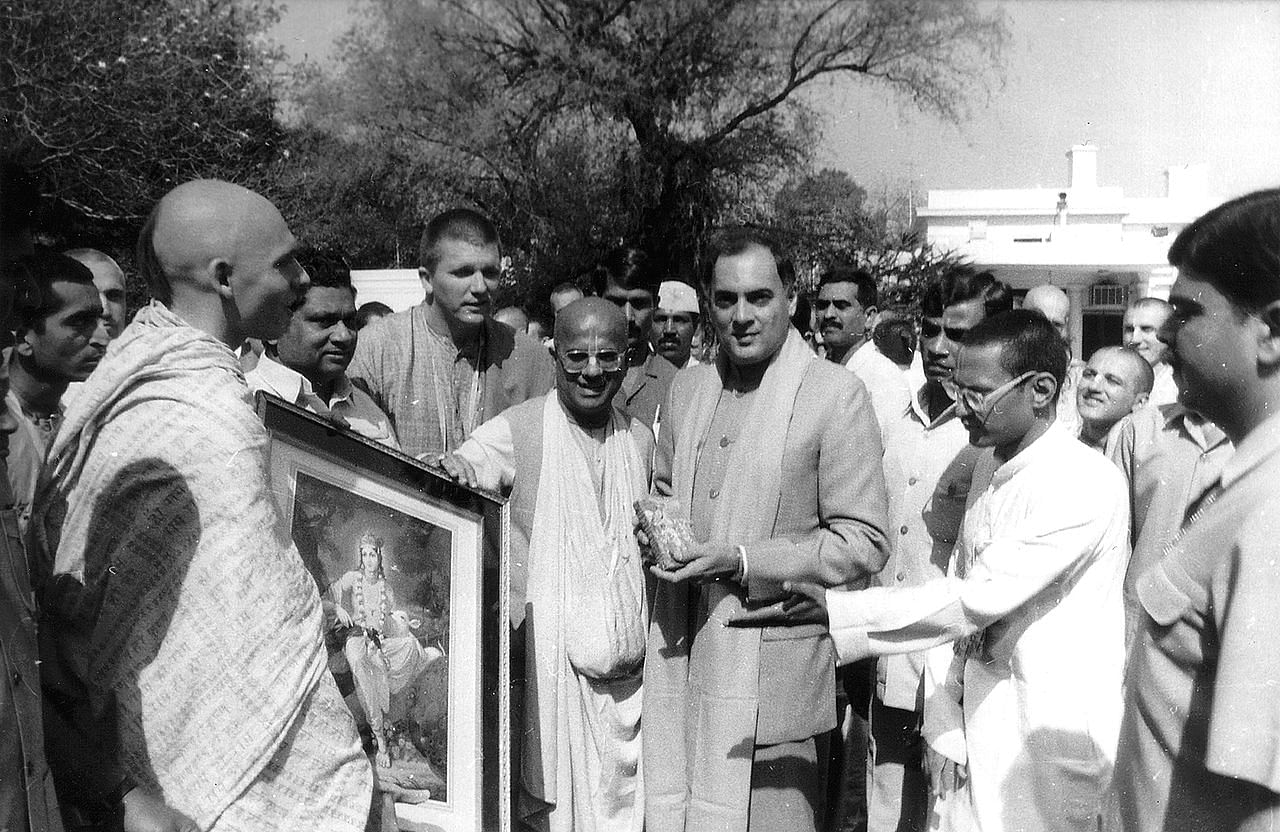 As if appeasing Muslim fundamentalists wasn’t enough, Rajiv Gandhi returned the favour by doing the same for Hindu ones. Looking to counter BJP’s accusations of ‘pseudo-secularism’, Rajiv Gandhi’s actions lay the foundation for the temple politics that would wreak havoc and lay waste in the country, killing thousands.

While former President Pranab Mukherjee called it an error of judgement, Madhav Godbole, Union Home Secretary accused Rajiv Gandhi of trying to use the Hindutva plank to get some voters.

He wrote in his book The Babri Masjid Ram Mandir Dilemma: An Acid Test for India's Constitution:

"Rajiv Gandhi remained focused on pleasing the fundamentalists among the Muslims and the Hindus; the Muslims by getting the Muslim Women's Divorce Act enacted, and later, the Hindus, by getting the locks of the 'temple in the mosque' in Ayodhya opened, permitting shilanyas (foundation stone-laying) of the new temple, and even starting the Congress party's Lok Sabha election campaign from Ayodhya to usher in Ram Rajya. I would unhesitatingly call Rajiv Gandhi the second most prominent kar sevak, after Nayar, the district magistrate of Faizabad, who encouraged the clandestine placement of the Ram Lalla idol in the Babri Masjid on December 22, 1949."

The communal genie was out of the bottle and there’d be riots in faraway places, leading to thousands of deaths that scarred the nation’s psyche and tore apart what some used to believe was the nation’s secular fabric.

While kickbacks are the norm across defence deals, this was the first time a PM was directly caught with his hand in the cookie jar, and the guilt is such that the Congress mouthpiece National Herald even labelled Rafale, BJP’s ‘Bofors’, an explicit admission of guilt from anyone related to the Congress.

But Bofors helped in the reversal of Rajiv Gandhi’s mandate and hurt the Indian Army as much as it hurt the Congress. It put India’s attempts to modernise its military in the ICU, inducing a deep fear psychosis for placement of orders fearing bribe scandals that haunts the bureaucracy.

In fact, it took 30 years for the Indian Army to get new Howitzers. As for the Bofors guns, they certainly didn’t let India down and worked like a charm in Kargil. And finally, Rajiv Gandhi’s greatest folly perhaps was giving the false hope that dynasts could win elections in India. While Rajiv managed it once in 1986, subsequent Gandhis have failed spectacularly.

Sonia Gandhi might have managed to stitch together coalitions, but Congress only won 145 seats in 2004, compared to BJP’s 138. In fact, BJP’s allies let them down in 2004.

In 2009, Congress managed 206 to BJP’s 116. MMS’ staunch refusal to buckle during the Indo-US Nuclear deal certainly played a part and keeping a steady ship with high growth helped UPA-II saunter home.That was also the heyday of the Gandhi-led Congress’ performance and since then the passing of the baton has resulted in a remarkable turnaround in fortunes with Rahul Gandhi’s coming-of-age has, resembling a modern-day Sisyphean struggle.

One is not even considering the state elections lost under Rahul Gandhi’s “able” leadership and if he had been the CEO of a company answerable to stakeholders, he would’ve been sacked thrice.

His sister hasn’t fared much better, and her first proper campaign saw them manage to squander the family seat of Amethi which means that Uttar Pradesh – a former Congress stronghold – has only one MP in Lok Sabha.

Anyone who is bright enough can see that Congress can’t even be an opposition force as long as it’s led by the Gandhis and their leftward turn makes them seem more like an NGO than a serious political party.

Its attempts at ‘soft Hindutva’ are equally laughable, and as comedian Varun Grover jokingly pointed out, even Lord Shiva can tell that Rahul Gandhi’s dhoti is ‘borrowed’ when he goes to temples.

The grand old party appears to have outsourced winning state elections to regional parties and is happy to play the smaller partner in alliances to keep BJP out of power.

While older leaders like Mamata and Sharad Pawar who splintered from the Congress, formed formidable regional parties, more contemporary ones like Mukul Roy and Himanta Biswa Sharma have helped BJP expand in new grounds.

Yet the Congress appears hellbent on continuing with the belief that the dynasty can help them win again, even avoiding giving the spotlight to anyone who might make Rahul Gandhi look inferior in comparison.

In Lok Sabha, talented speakers like Shashi Tharoor and Manish Tewari were bypassed to pick Adhir Ranjan Chowdhury, an MP from Bengal who has trouble expressing himself in both Hindi and English.

It’s almost sad that the only time Congress can find its voice is when Sonia Gandhi is insulted. Compared to the deafening crescendo that emanated from the Congress when Arnab Goswami attacked their materfamilias, Cong’s other protests regarding the CAA-NRC, Delhi riots, economic downturn and migrant crisis barely registered a whimper.

That might be Rajiv Gandhi’s most tangible, ever-lasting legacy, that despite a pan-India presence, the party that helped India attain freedom can’t even mount a credible opposition. The family has become a perennial albatross around the grand old party’s neck.

Breaking up my country by Rajiv Gandhi

How Rajiv Gandhi, such a ‘nice man’, won and ruined India’s biggest mandate

Bhopal gas tragedy: How Warren Anderson got away from our grasp

Disclaimer: The views expressed are the author's own.

Nirmalya Dutta is the Web Editor the Free Press Journal and tweets at @nirmalyadutta23.