From Uttar Pradesh to Maharashtra, protests erupted in several states over the controversial remarks on Prophet Muhammad. Meanwhile, protests even turned violent in Jharkhand's Ranchi and West Bengal's Howrah.

Protests erupted outside the Jama Masjid after Friday prayers with hundreds of people demanding the arrest of Nupur Sharma for her controversial remarks, police said.

However, Shahi Imam of Jama Masjid, Syed Ahmed Bukhari, distanced himself from the protest saying "no body knows who the protesters were" and demanded action against such people. 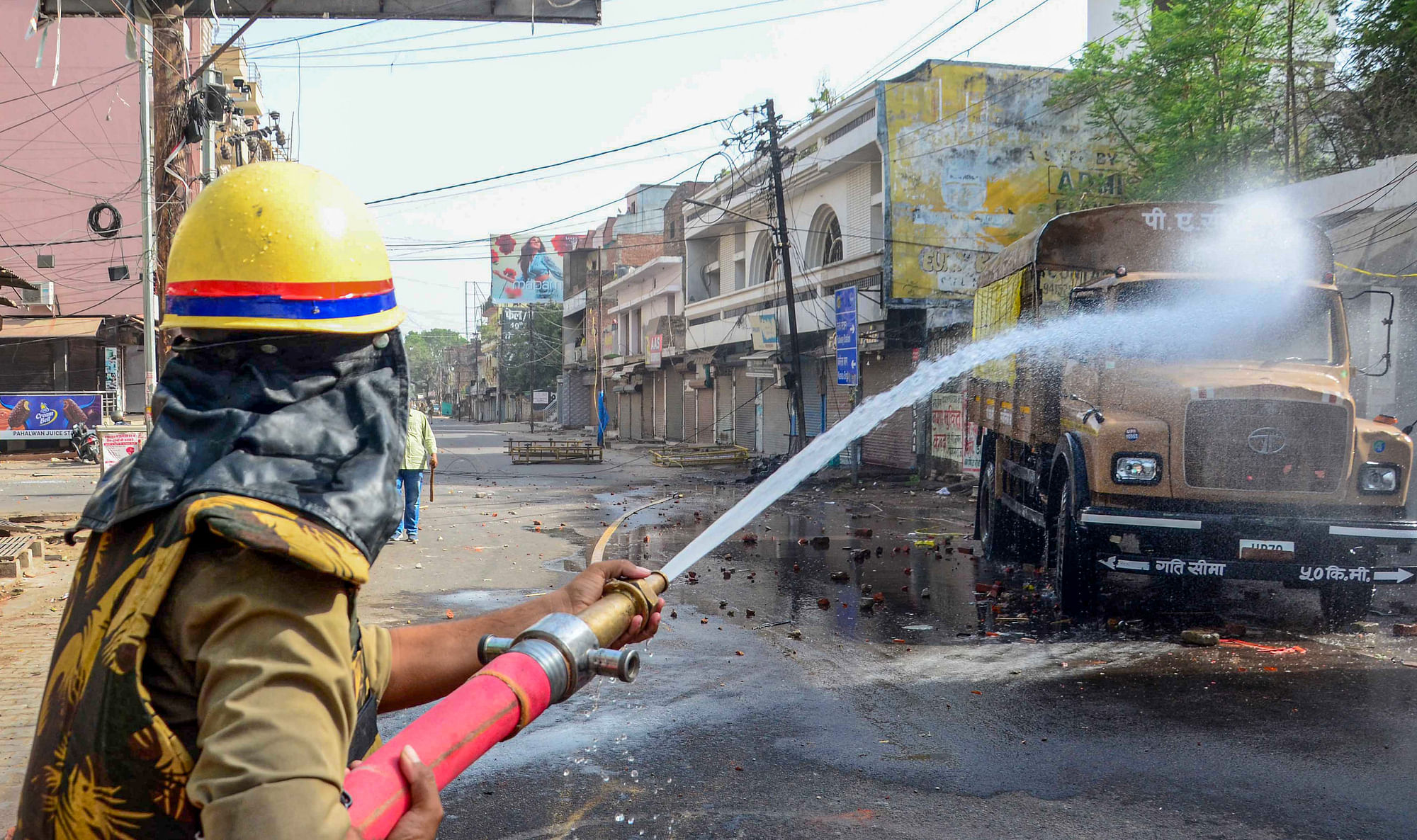 Prayagraj: A firefighter tries to douse a fire that was allegedly set ablaze by miscreants during a protest over controversial remarks made by two now-suspended BJP leaders about Prophet Mohammad, at Atala area in Prayagraj, Friday, June 10, 2022. | (PTI Photo)

Besides, several students of Jamia Millia Islamia staged a demonstration on the varsity campus in Delhi against Sharma.

The students gathered "in a large number" at Gate no-7 of the varsity and demanded the arrest of Sharma "for hurting religious sentiments", said student outfit Campus Front of India.

They raised slogans against the BJP and Sharma. They also held placards that read--'Balshphemy is RSS's inborn language, Save India from them, Arrest Nupur Sharma' and 'Stop Attacking Muslim'.

A curfew has been imposed in several areas of Jharkhand's Ranchi after a protest over the controversial remarks turned violent today.

Vehicles were torched and vandalised and stone-pelting took place. Besides, several policemen sustained injuries while trying to control an irate mob near Hanuman Temple, situated on the city's Main Road. 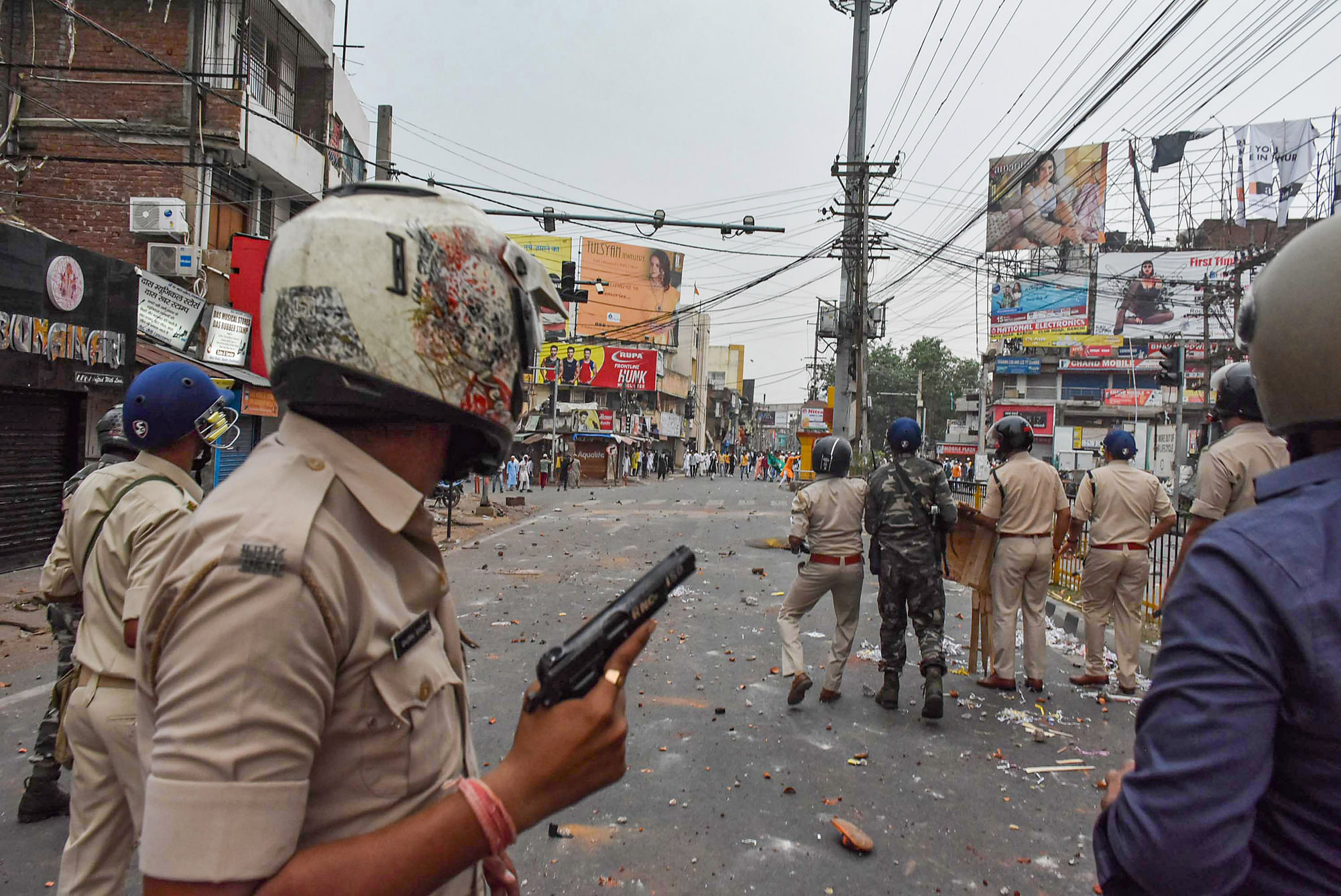 Police fired in air and even resorted to lathi-charge to control the mob which spilled out on the road after Friday prayers and pelted stones and shouted slogans.

"Few policemen have been injured. We are looking into the situation. We are reinforcing deployment," a senior police official told news agency PTI.

Police vehicles and booths were set on fire by protestors in West Bengal's Howrah today after protests turned violent.

The agitators clashed with police personnel at Dhulagarh, Panchla and Uluberia when they tried to lift the blockade on National Highway-6, they added. 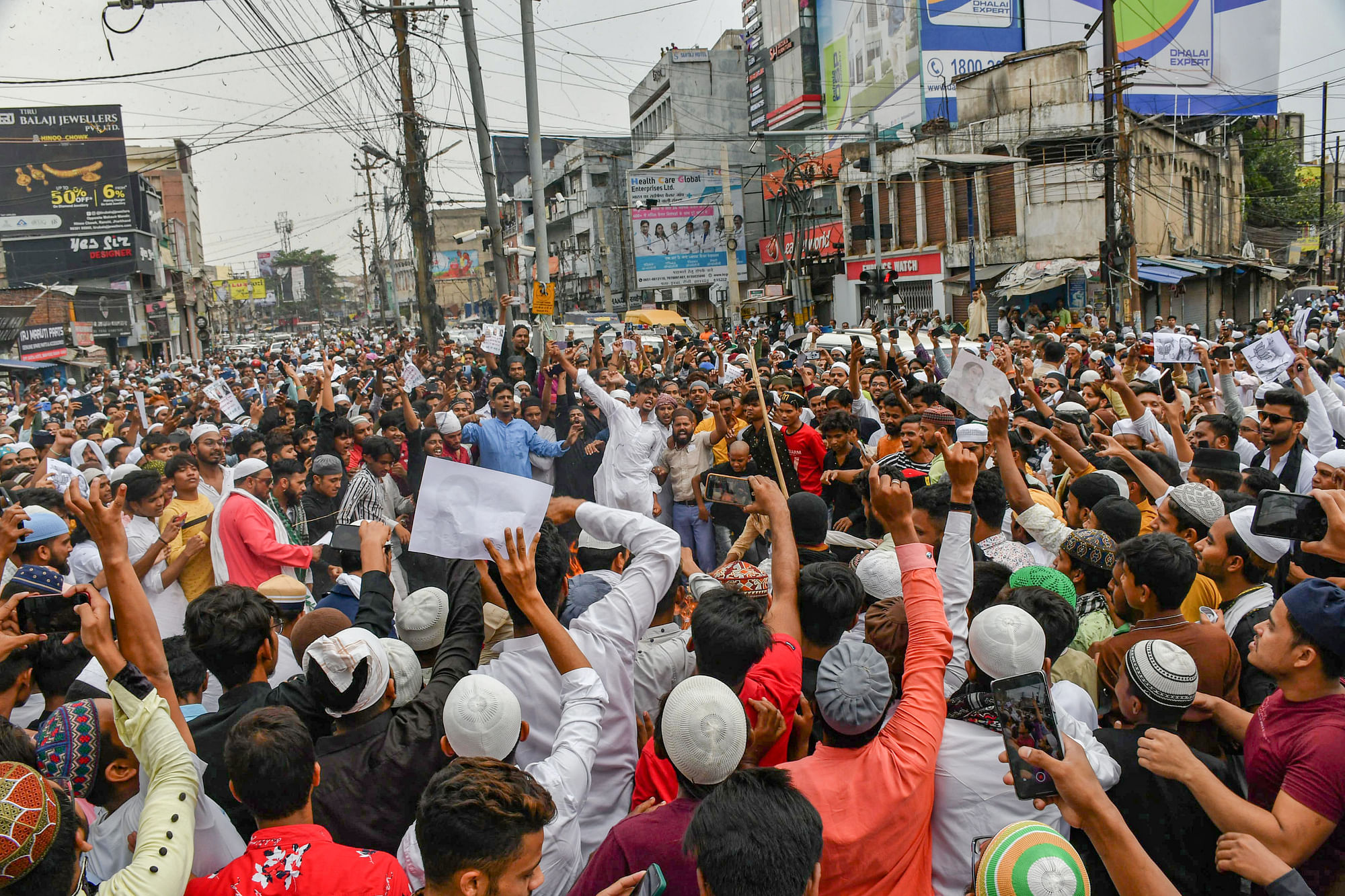 Ranchi: People from the Muslim community shout slogans during their protest over controversial remarks made by two now-suspended BJP leaders about Prophet Mohammad, in Ranchi, Friday, June 10, 2022. | (PTI Photo)

Police had to baton-charge to disperse the crowd at Dhulagarh and Panchla, where the demonstrators pelted stones in retaliation, causing damage to nearby cars, they further said.

People pelted stones at policemen in Prayagraj and Saharanpur as protests broke out after Friday prayers in at least four other cities in Uttar Pradesh.

In Prayagraj, some motorcycles and carts were set on fire and an attempt was made to set ablaze a police vehicle. 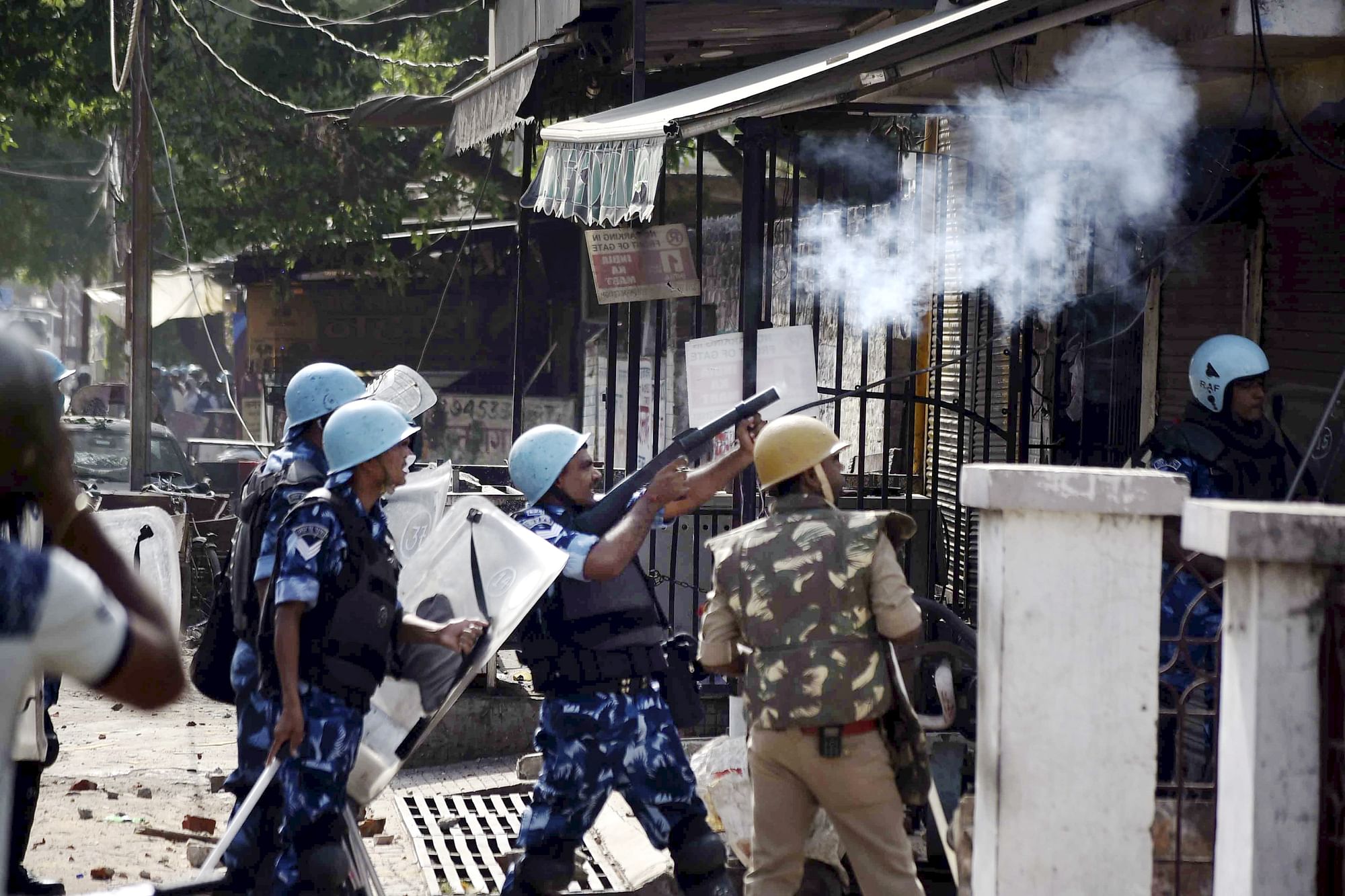 Police used tear gas and lathis to disperse mobs and peace was later restored, they said, adding that one policeman was hurt in Prayagraj.

There were also protests in Bijnor, Moradabad, Rampur and Lucknow over the controversial remarks. Sloganeering took place in Lucknow.

A large number of people in Marathwada, especially in Aurangabad, Solapur, Parbhani, Ahmednagar and Raigad protested against Nupur Sharma's remarks on Prophet Muhammad.

Maharashtra Home Minister Dilip Walse-Patil, meanwhile, urged the people to maintain peace and cooperate with the police in maintaining law and order across the state.

Walse-Patil said he reviewed the situation after the protest in various parts of the state and instructed the senior police officials to take due steps to keep the law and order situation under control. ''Please maintain peace and take necessary care to avoid any law and order problem in the state,'' he appealed to the citizens. 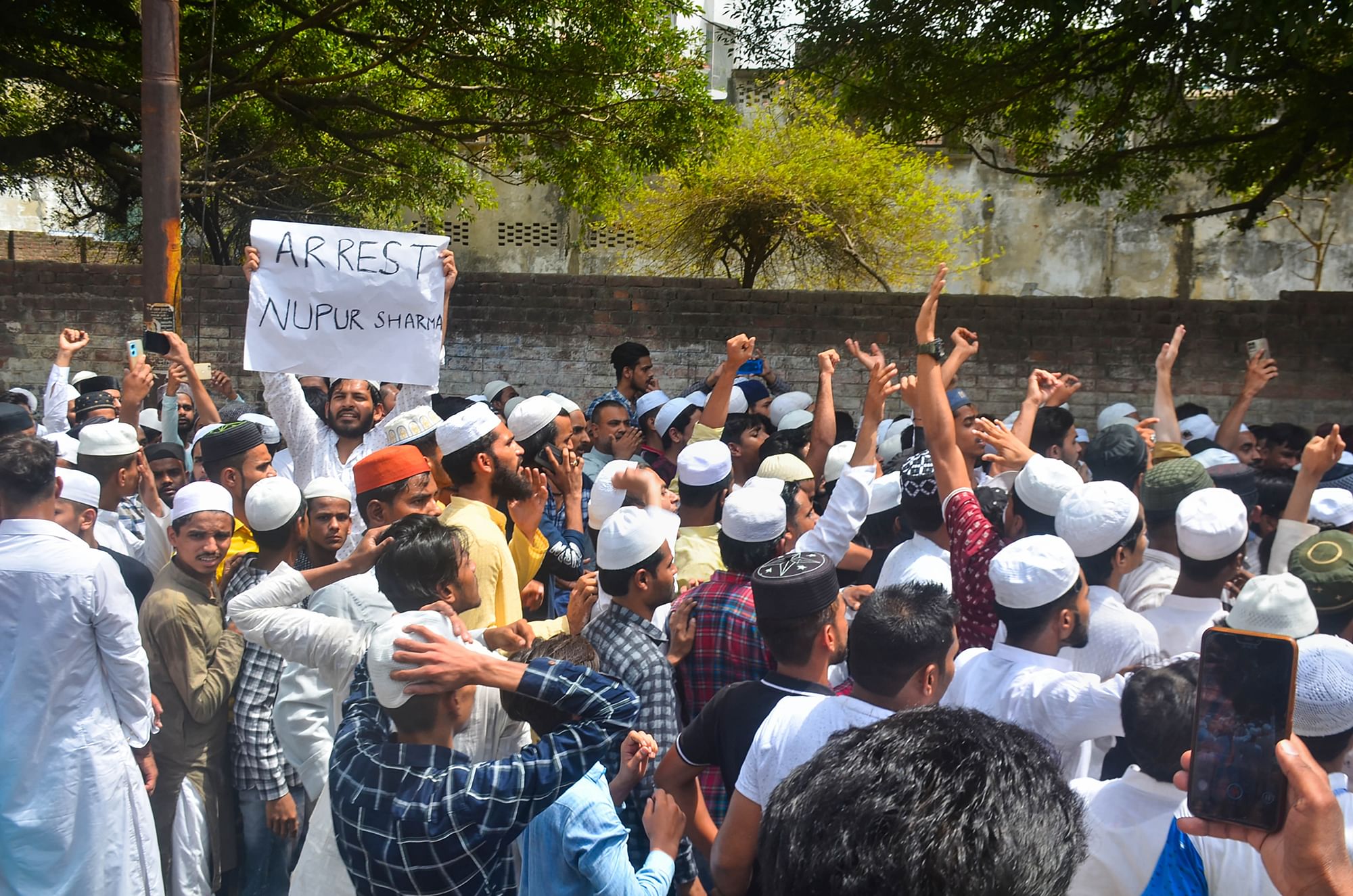 Walse-Patil said the state government and the home department have taken a serious note of Nupur Sharma's remark and the case registered against her.