Project Maanush: Addressing gender and sexuality issues in Assam |
Follow us on

The 23-year-old resident of Bokakhat in the Golaghat district of Assam, Monahar Pegu spoke with anguish and anger about the rampant ragging and abuse male students undergo at the hands of their seniors in Dibrugarh University. This student from the Mising tribal community who is pursuing a post-graduate degree in Political Science remembers how it started in September 2019 soon after his admission. “The seniors would sing ribald songs and keep us awake and standing in our undergarments asking us to repeat lines from those songs. Sometimes we would be standing from 11 pm in the night till 4 am.”

The humiliation and exhaustion from sleep deprivation made him depressed and he was happy when the first lockdown was announced in March 2020. When the university reopened in December 2020, he felt the ragging and harassment would be a thing of the past but it came back but it got worse.

Monahar remembers how the student council elections 10th April 2021 triggered this move. “I have never been too interested in the elections. I come from a background where getting education is my only hope out of my current circumstances,” he recounts. Soon after voting (as was his habit) he sat in the library studying till 8.30 pm returning to his hostel room in Miles Bronson Chhatra Niwas at 9.30 pm. He was unaware that the upper caste candidate Bishal Sharma had lost the elections and Lokhinanda Tayeng a fellow Mising tribal had won to become General Secretary. Around 3.30 am his door was kicked open by a drunk student Mrinal Rabha who pulled him out. He was dragged to where the upper caste gang was waiting. They began raining blows on him blaming him for the loss of their candidate targeting his private parts threatening that they will “not leave him man enough.”

When he passed out, an alarm was raised by other students who rushed him to the hospital. After his department faculty raised this issue with the University registrar, the police finally registered an FIR. Repeated attempts at reaching Dibrugarh SP Shwetank Mishra to find out why the Scheduled Castes and the Scheduled Tribes (Prevention of Atrocities) Act, 1989 was not invoked despite the attack being perpetrated by upper castes against a tribal drew a blank.

After an FIR was lodged the other side claimed that they had attacked Monahar in self-defence as he had come to hit them and lodged a cross FIR with the Rajabhadra police outpost. Brihatrabar Pegu is also from Mising tribe and a fellow student of Monahar pursuing an MA in History from the Dibrugarh University also recounted the horrors of the ragging when he joined the postgraduate programme in September 2019.

He laments that the authorities do not take action against the perpetrators. 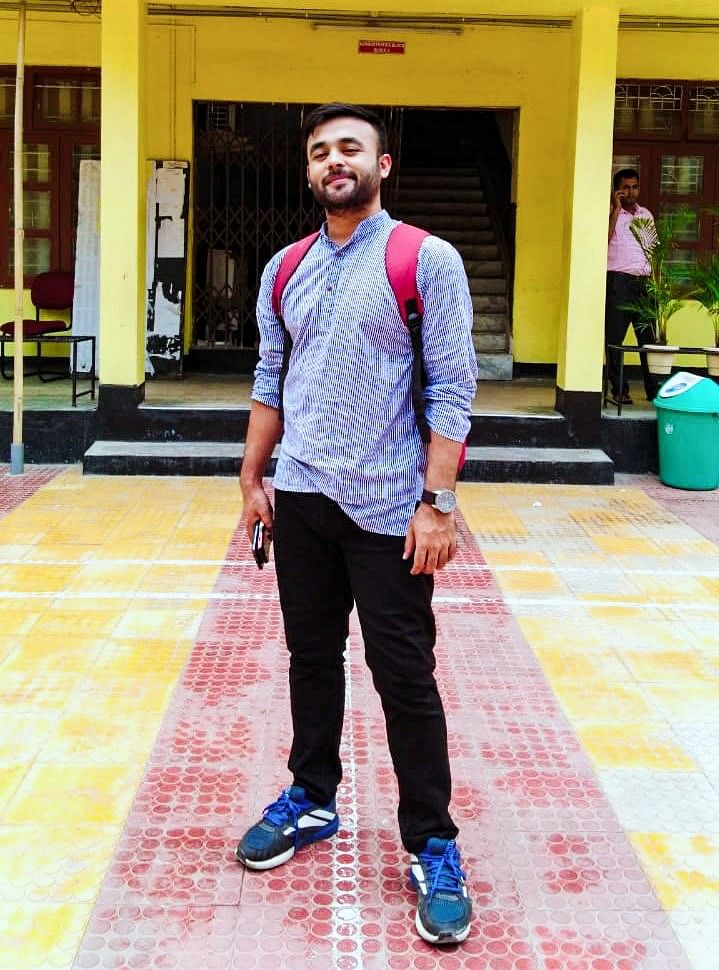 Prasant Kumar Ojha who is simultaneously pursuing an MA in History and a post-grad diploma in Folklore & Culture Studies faces regular harassment by the cis-het crowd at the Guwahati university who use explicit gestures and slang to harass him. A few months ago when a senior male student stroked his behind in front of everyone asking if he should keep a condom handy, Prashant protested and was told, “You were signalling me by wearing a green kurta.”

After written complaint to authorities, Prashant expected the harassment would stop. Instead, the next day the same senior began catcalling and whistling when he walked by him in the corridor. “You are looking hotter today,” he called out.

Since the complaint was not leading to any action to stop this, Prashant articulated his pain and anger in a blog which has garnered thousands of likes and hundreds of responses. “I feel it is wrong that I should be made to feel uncomfortable or unsafe just because someone’s homophobia is not being addressed.” Wise beyond his years, the 23-year-old self-taught photographer’s smile reaches his eyes as he shyly greets everyone. Alongbar Basumatary of Dangtalgaon in Assam’s Chirang district says he is still exploring his sexuality. “The references in popular literature and media for a gay man are all from Americanised metropolitan mainland India. From a gender and sexuality point of view for people like me who are coming out even to themselves this can be very trying and difficult,” he says and says he had his first sexual encounter with a man who he felt was serious very recently. “But he was only looking for short lived physical intimacy while I am looking for companionship. I have now decided to first find companionship and then get intimate.”

22-year-old Ashraful Islam who pursuing graduation in History is battling several battles together. This resident of Islampur village is located in Baghbor Tehsil of Barpeta district in Assam, India is a Muslim Bengali. Like most inhabitants of the 100 homes in his village, they speak both their mother tongue Bengali amongst themselves and Assamese while communicating with others. But this has made them vulnerable to being persecuted. “Our identity as Muslims and as Bengali speaker one is often unilaterally conflated to make us the target of hate crimes and persecution. The arrival of the Citizenship Amendment Act, 2019 (CAA), combined with the proposed National Population Register (NPR), which will be the first step to a nationwide NRC (National Register of Citizens), seems to be designed to make us feel like non-citizens.”

Even as he spoke to this writer Ashraful’s village was inundated waist deep with flood waters. “People are worried more about their documents than their own safety or the safety of their livestock and homes because the authorities can simply pick up anyone and dump them in the detention centres with the onus of proving citizenship on the person.”

He points out how the desperately poor people are often unable to read or write. “This puts them completely at the mercy of authorities,” he says and points out that the few educated youth in the village are working to help everyone get their documents in order.

And yet he admits that the people in his village and other neighbouring ones who fall outside the gender binary are the worst hit. “Within the community they face ridicule, scorn and harassment. Often estranged from their biological families to prevent persecution and violence they are barely able to eke an existence to survive. Targeting such vulnerable individuals for papers to prove citizenship is a travesty of justice,” he says.

These are not isolated instances. Whether student politics in universities, tribal identity issues or even the protests in the wake of the Citizens Amendment Act and the planned National Register of Citizens very often the gender and sexuality intersectionality ends up invisibilised. A recent three-day workshop in Guwahati on gender and sexuality - to mark the completion of a year of the Project Maanush by Men Against Violence and Abuse (MAVA) which engages boys and men to address issues of gender inequality and discrimination by interrogating the existing dominant model of masculinity and help stop prevent gender-based violence against women – shone the torch on such invisibilisation.

Each of the 30 Assamese youth who participated in this workshop - part of the group of 80 mentees (30 from Assam, 30 from Gujarat and 20 from Karnataka) with whom the project is working to sensitise and engage with them on a wide range of gender issues, enabling them to take ownership – articulated their own experiences of how they have had to deal with toxic masculinity and abuse.

Head of Men Against Violence and Abuse (MAVA) Harish Sadani appreciated how articulate the participants of the workshop were. “There is a gradual shift in perspectives and understanding among mentees - this observed through their involvement during workshops/ sessions, the feedback given by them during and post sessions,” he said and informed how rigorous orientation sessions for potential mentees helped identify the 30 youth (18 to 25 years), mostly studying in universities and colleges (some working) to be selected as mentees in Assam.

Nelson Deb, Coordinator Project Maanush said he felt proud to see how much progress the mentees have made. “There is enough capacity-building among mentees thanks to the interactions and training they receive as part of the project. They are now able to talk about gender and sexuality issues articulately not only at our interactions and amongst themselves but have also been able to take this seed thought to their communities and peer groups.”