ON CAMERA: Son kicks, punches mother mercilessly in Uttar Pradesh's Maharajganj after she asks him about expenses

The son relentlessly beat his mother in the gruesome video clip, then grabbed the old woman by the hair and kicked in her face.

ON CAMERA: Son kicks, punches mother mercilessly in Uttar Pradesh's Maharajganj after she asks him about expenses | Screengrab
Follow us on

Maharajganj: A shocking video surfaced on the internet, on Saturday, in which a son was seen mercilessly beating his mother. He tossed and thrashed her repeatedly, while people stood by and watched. The chilling video is from the Maharajganj district of Uttar Pradesh.

The video shows him grabbing the old woman by the hair and kicking in her face. Finally, when the locals interrupted to save the lady, he pushed them away and continued beating her. Later, when he left her, a couple of men came to pick up the almost unconscious lady and put her aside.

As per the reports, the mother had asked the son about the expenses. On this, the accused son got angry and thrashed her. As per the report by the mother, the police have filed FIR and the investigation is underway.

#WATCH: Son thrashes mother mercilessly in #UttarPradesh's Maharajganj district.
In the viral video, one can see him dragging his mother by her hair, kicking and punching her in the face.#India #IndiaNews #UPNews #UPPolice #Mother #Son #ViralVideo pic.twitter.com/25MgKlO6M2 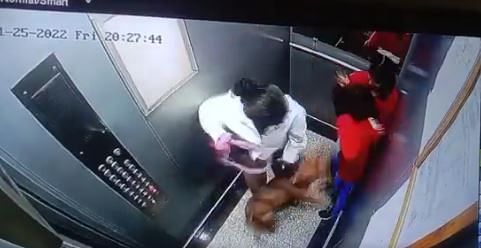