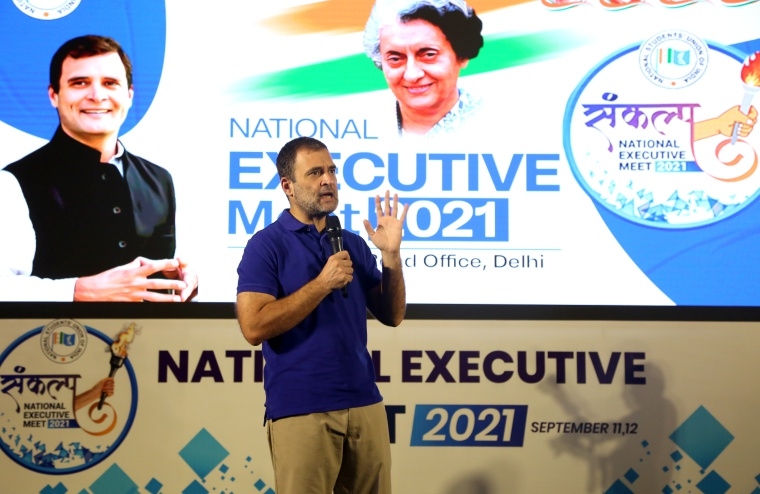 In a resolution drafted by NSUI national president, Neeraj Kundan on the behalf of the students' body wrote, the National Students' Union of India (NSUI) in its two day National Executive "Sankalp" resolves and proposes in one voice that Rahul Gandhi be appointed as President of Indian National Congress.

"We, the office bearers of NSUI, encompassing State Presidents, National Office Bearers and National Coordinators, are the product and result of transformation brought in the political system which empower common students from non-political backgrounds to engage with political parties and able to bring Character Development and Nation Building.

Furthermore, the union said, "Mr. Rahul Gandhi is the foremost and honest leader who took a stand and strengthen the voice of students for their betterment, and also helped in garnering enough support by raising matters of student importance and also looking for adequate justice for the students fraternity on varied subjects to fight for democracy and transparency."

In a resolution of its two-day national executive 'Sankalp', the National Students' Union of India (NSUI) proposed to appoint Rahul Gandhi as Congress president. pic.twitter.com/oYm6euUdiC

The union further said, "We recognise Rahul Gandhi's dedication to India's student which empowers us, and re-affirm our faith in his keen leadership abilities and statesmanship under which India can reach the pinnacle of success developing into a more sustainable and peaceful society."

For the unversed, back in 2017, Rahul Gandhi succeeded his mother Sonia Gandhi as the Congress president and led the party into the 2019 Lok Sabha elections.

However, Congress performed poorly winning just 52 seats, failing to get even 10 per cent of the total seats in the House to claim the post of the Leader of Opposition.

Following the disappointing outcome, Gandhi resigned as the party chief and was once again the position was handed over to Sonia Gandhi.

A large majority of leaders are in favour of Rahul Gandhi becoming the next chief, however, a group of senior leaders has been calling for a non-Gandhi president.

'No difference in Sunday and Monday under BJP': Rahul Gandhi takes jibe at government over 'job...