HomeIndiaMizoram CM says border row with Assam to be resolved through ‘meaningful dialogue’: Here's what we know so far

Mizoram CM says border row with Assam to be resolved through ‘meaningful dialogue’: Here's what we know so far

During the phone call, it was decided to resolve the border issue amicably through meaningful dialogue, Zoramthanga said.

"As per telephonic discussion with Union Home Minister and Assam Chief Minister, we agreed to resolve the Mizoram-Assam border issue amicably through meaningful dialogue," he tweeted.

Zoramthanga also urged the people of Mizoram to refrain from posting provocative messages and misuse of social media in order to de-escalate the ongoing tension.

"In the meantime, in order to prevent any possible escalation of the situation, I request the people of Mizoram to avoid posting sensitive messages and make judicious use of social media platforms," he said.

Meanwhile, Assam Chief Minister Himanta Biswa Sarma said, "Our main focus is on keeping the spirit of North-East alive." He also said that border disputes can only be resolved through discussion.

"Our main focus is on keeping the spirit of North-East alive. What happened along the Assam-Mizoram border is unacceptable to the people of both states. Honble CM @ZoramthangaCM had promised to call me post his quarantine. Border disputes can only be resolved through discussion," Assam CM Himanta Biswa Sarma tweeted.

Mizoram Chief Minister Zoramthanga and Assam Chief Minister Himanta Biswa Sarma's statements came amid a week of re-ignited border tension after seven people, including six Assam Police personnel, were killed and scores injured in a clash along the Mizoram-Assam inter-state border on July 26.

Here's what we know so far:

Tension continued at the border areas after the violent clash that took place near Vairengte town in Mizoram's Kolasib district on July 26, leaving at least seven people from Assam, including six police personnel, dead.

The situation currently in and around the area of the clash continues to be tense but calm as a large number of CRPF troops have started patrolling NH-306 which runs between the two states.

The Centre has deployed around five companies of the Central Armed Police Force (CRPF) to defuse tension.

Both the states have accused each others’ forces and residents of initial provocations and opening fire and sought the Central government's intervention.

Police on both sides have lodged cases. Assam has registered a case of murder and trespass against Mizoram officials.

The Assam government has received support from opposition parties in the ongoing stand-off.

A 19-member all-party delegation of Assam assembly, headed by Speaker Biswajit Daimary, decided to visit Delhi and urge the Centre to resolve the state's boundary dispute with Mizoram at the earliest.

Read Also
FPJ Explains: What is Assam-Mizoram border dispute? All you need to know about unresolved row which... 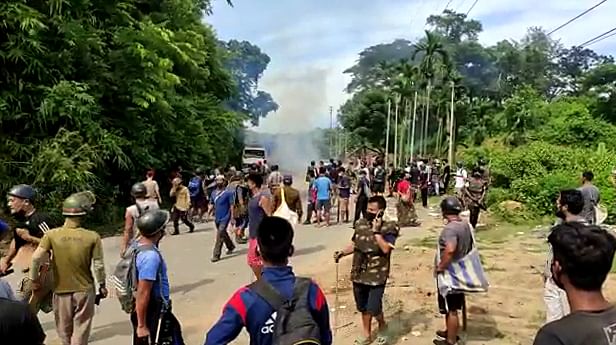