The incident took place at Mankoli junction in Bhiwandi town on Mumbai-Nashik highway on Thursday afternoon, they said.

Potholes at Mumbai-Nashik highway | Photo: PTI
Follow us on

Thane: A pothole-ridden road at Bhiwandi in Maharashtra''s Thane district has claimed the lives of a woman and her 26-year-old son, who were returning home on a two-wheeler after having ''darshan'' of Lord Ganesh idol at their relative''s place, police said on Friday.

The incident took place at Mankoli junction in Bhiwandi town on Mumbai-Nashik highway on Thursday afternoon, they said.

The deceased were identified as Devikabai Balaram Kakade (48) and her son Nitin, police said.

"They were returning home to Ambepada on a two-wheeler after having darshan of the Lord Ganesh idol installed at the house of the woman''s daughter in nearby Purna village. When they reached Mankoli junction, their two-wheeler skidded off the road after hitting a pothole and both of them fell down. They came under a speeding vehicle that was coming from behind," an official said.

The victims were rushed to a hospital, where the doctors declared them brought dead, he said, adding that the bodies were later sent for post-mortem.

A case has been registered against an unidentified driver of the vehicle under relevant sections of the Indian Penal Code (IPC) and the Motor Vehicles Act at Narpoli police station and further investigation is on, he said. Read Also
Mumbai: BMC sets up 24 teams for fixing potholes in every ward 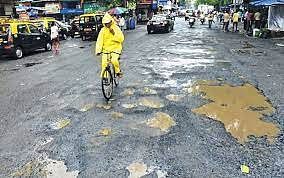