The groups were separated from each other in enclosures put up with police barriers, advocating different causes.

Protest out United Nations | Photo: ANI
Follow us on

The groups were separated from each other in enclosures put up with police barriers, advocating different causes.

The biggest group of them was that of about 100 Khalistan supporters waving yellow flags and carrying portraits of Simranjit Singh Mann, the president of the Shiromani Akali Dal (Amritsar).

The organisers of the other three protests disowned the Khalistanis and said they were not associated with them, pointing to the barriers separating them from that group.

One of the groups was the Indian National Overseas Congress, which supports the Congress in India and was protesting against what they said were human rights violations. Another was a protest organised by a local gurdwara in support of the farmers' agitation in India focused solely on the agriculturists' issues.

They stationed themselves far from the Khalistanis and an organiser said that they did not have anything to do with that protest and distinguished themselves with green turbans.

The Hindus for Human Rights (HHR) organised yet another protest that was sandwiched between the Congress and Khalistani protests. An organiser said that they were not associating themselves with the Khalistanis and their enclosed barrier next to that group's was assigned by the police.

HHR protested against the Citizenship Amendment Act (CAA), the National Register of Citizens (NRC) and other laws and regulations, as well as what they called human rights violations and detention of activists in India.

Its executive director, Peter Cook, a protestant pastor who said he had been deported from India, asserted that his organisation opposed the CAA even though it gave citizenship rights to Christians fleeing persecution, because it "pits Christians against Muslims".

The Khalistani protesters, who were not allowed by the police to demonstrate outside India's mission to the UN, drove past it in cars flying their flags and raising slogans.

Supporters of Kashmiri separatists and Pakistanis, who held protests in the previous years, were not seen this time.

Read Also
76th UNGA: India is a 'mother of democracy' says PM Modi in his address to UN General Assembly 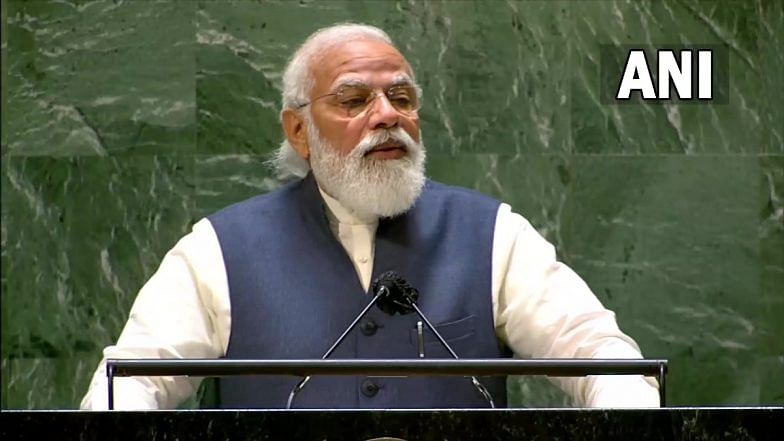