76th UNGA: India is a 'mother of democracy' says PM Modi in his address to UN General Assembly

He also paid tribute to all those who have lost their lives in the deadly COVID-19 pandemic.
ANI 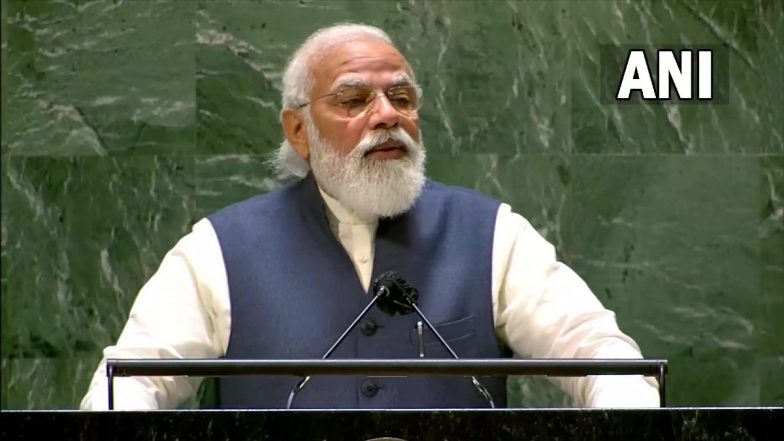 New York: Highlighting the strength of the Indian democracy, Prime Minister Narendra Modi on Saturday noted how a little boy who at one time used to help his father at his tea stall, is today addressing the United Nations General Assembly (UNGA) for the fourth time.

Speaking at the 76th session UNGA, PM Modi said that he represents a country that is known as the 'mother of democracy.' "We have a great tradition of democracy that goes back thousands of years." India's diversity is the identity of the country's strong democracy, he added. "It is a country that has dozens of languages and hundreds of dialects, different lifestyles and cuisine. This is the best example of a vibrant democracy."

"The strength of the democracy is demonstrated by the fact that a little boy who at one time used to help his father at his tea stall is today addressing the UNGA for the fourth time," PM Modi said.

He also paid tribute to all those who have lost their lives in the deadly COVID-19 pandemic.

The theme for this year's General Debate is 'Building Resilience through hope to recover from COVID-19, rebuild sustainably, respond to the needs of the planet, respect the rights of people, and revitalise the United Nations.'

The high-level segment of the 76th UNGA began in New York on Tuesday. The UNGA meeting this year is in a hybrid format but a large number of leaders have arrived in New York.

Modi had arrived in Washington on Wednesday for a three-day visit to the country. This was his first visit beyond neighbourhood since the outbreak of the COVID-19 pandemic.

He also held meetings with five global CEOs for potential investments in India.