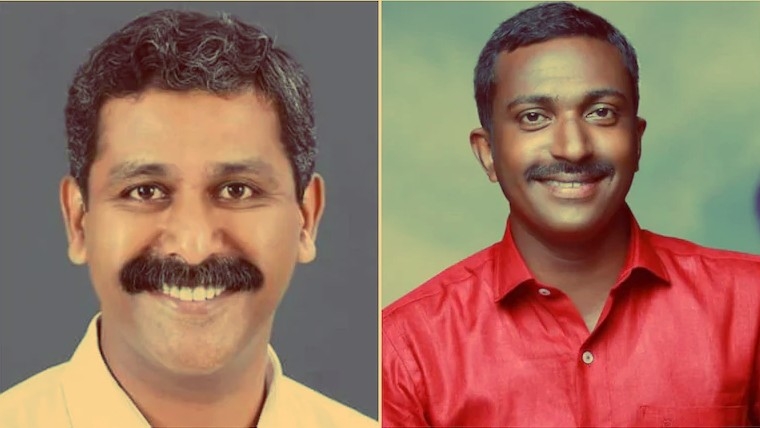 Kerala's Alappuzha district was rocked by back-to-back killings of two party leaders, the first belonging to the SDPI (Social Democratic Party of India) and the second to the BJP (Bharatiya Janata Party), leading to clamping of prohibitory orders by police on Sunday.

According to reports, KS Shaan was attacked and murdered on Saturday night. This was followed by the murder of Renjith Sreenivasan at his house by unidentified people early on Sunday morning in Alappuzha.

According to the police, Shaan was on a two-wheeler when a gang in a car attacked him on Saturday night. SDPI has alleged that RSS workers are behind this attack. Within 12 hours after Shaan's murder, Renjith Sreenivasan was killed at his house by unidentified people early on Sunday morning in Alappuzha, they added.

Police said it suspects the fatal attack on Sreenivas was in retaliation to the killing of Shaan.

State Police Chief (SPC) Anil Kant said that senior police officers were camping in the district and additional forces have been deployed there.

He said that ADGP-Law and Order would be heading the probe into the killings and that the police would soon be rounding up troublemakers, 'goondas' and their leaders in the area to prevent another such incident from happening in the near future.

Kant also said a state-wide alert has been announced and all District Police Chiefs have been directed to closely monitor the law and order situation there and if required, prohibitory orders would be imposed and additional forces would be deployed.

Kerala Chief Minister Pinarayi Vijayan on Sunday condemned the killings and said steps will be taken by the police to nab the culprits and those behind them.

He said such heinous and inhumane acts of violence were dangerous to the country and that people should keep away from such groups and their hateful activities.

How did the BJP react?

Terming the BJP's leader's killing as disgraceful, Union Minister of State for External Affairs and Parliamentary Affairs V Muraleedharan said had the police taken appropriate steps after the murder of the SDPI leader, the situation would not have escalated to the present level.

He said Sreenivas' killing was a result of the failure of the state government and the police to take precautionary or preventive steps after the SDPI leader's murder.

He also said that according to information he has received, SDPI was behind the killing of the BJP leader.

Muraleedharan said that such incidents were not new in Kerala and alleged that in a similar incident in Palakkad recently, the government and CPI(M) actively protected the assailants.

He said that the Left government in Kerala was giving a free hand to Islamic terror groups and this was making things worse in the state.

Kerala BJP president K Surendran accused the Popular Front of India (PFI), a banned outfit and parent organisation of the SDPI, of attacking its party leader.

"Strongly condemn the brutal murder of OBC Morcha State Secretary Adv. Renjith Sreenivasan by PFI terrorists. He was hacked to death in broad daylight. Renjith contested the assembly elections in BJP ticket in 2016. PFI has murdered three BJP-RSS leaders in the last two months," K Surendran said in a tweet.

"This Smiling man whom you see in the photo is no more smiling ..for he has been hacked to death by goons in Kerala today morning. He’s Renjith Sreenivasan, the OBC Morcha Secretary of @BJP4Keralam. Rightly said “Wherever there’s left, nothing is left of humanity," BJP national spokesperson tweeted Sambit Patra.

What did SDPI say?