Harsha, 27, was hacked to death by a gang of miscreants on February 20 at the height of the hijab crisis triggering concerns and law and order situation

Members of various pro-hindu organisations stage a protest march over the alleged murder of Bajrang Dal activist Harsha in Shivamogga, in Chikmagalur | PTI

Bengaluru: Photos purportedly showing accused in the Bajrang Dal activist Harsha murder case getting a special treatment in Parappana Agrahara Central Prison in this city of Karnataka have gone viral on social media.

In the pictures, the accused can be seen talking over mobile phones and making video calls. According to sources, the accused are enjoying special privileges inside the prison.

Soon after the pictures surfaced, Harsha's family expressed its disappointment saying that they have been betrayed by the system.

Notably, the state government had patted its back after nabbing the accused within 24 hours of the brutal murder, which made national news.

Currently, the case is being probed by National Intelligence Agency (NIA) and the accused are undergoing imprisonment in the Central Prison of Parappana Agrahara in Bengaluru.

As the photos went viral on social media, the prison authorities conducted raids to ascertain how the accused got mobiles inside the prison.

Investigations are also underway to figure out zero in on the people the accused were in touch with and also were there any attempts to destroy evidence or derail the probe.

The development has come as a shocker to Harsha's family.

"The government system is flawed. There is no humanity, one life is lost and no one has the commitment to provide justice," the deceased's sister Rajini said.

"No one seems to bother. Though, probe is progressing, look at how the accused are talking to their wives and families. They have all the support. We have lost our brother and are suffering. The jail authorities must be suspended and we should get justice. The treatment special treatment being meted out to the accused will set a wrong example and encourage the youth to tread on the wrong path. It will give out a massage that even after committing murder, they can have all luxuries and come out within three months," Rajini stated.

Padma, Harsha's mother said if the accused are provided such luxuries inside the prison, the government might as well release them. "We feel justice is denied to us," she stated.

Harsha, 27, was hacked to death by a gang of miscreants on February 20 at the height of the hijab crisis triggering concerns and law and order situation.

Popularly known as Harsha Hindu, Harsha was at the forefront of Hindutva activities and questioned illegal transportation of cows. He shared fierce Hindutva messages on his social media accounts and also commented on the hijab issue.

Parallel to the protests that resulted after the Karnataka High Court passed its order banning hijabs in educational institutions, there were several instances of violence. Allegedly, these were a result of the victims' social media posts against allowing the hijab in colleges.

Dilip, a shopkeeper in Davanagere, was attacked by a mob who dragged him out of his shop where he was attacked and stabbed.

A man, named Naveen, and his mother Sarojamma were also attacked in the village of Nallur, by an angry mob of around 300 masked people bearing deadly weapons. Both were alleged by the victims families to be a result of posting an anti-hijab status on WhatsApp.

Harsha's own murder also led to another round of violence.

Stones were pelted at his funeral procession, which injured 3 people when the procession reached Siddiah Road. A photojournalist, two bystanders and a policeman were also injured. Some vehicles were also set on fire, and more than 20 were damaged.

The crowd retaliated torching vehicles, tyres, stoned many commercial establishments and houses belonging to the Muslim community. Local journalists claimed that they were attacked and their cameras damaged by the mob.

Sections of the Unlawful Activities (Prevention) Act were invoked by the police, and the National Investigation Agency (NIA) was tasked with probing the case. 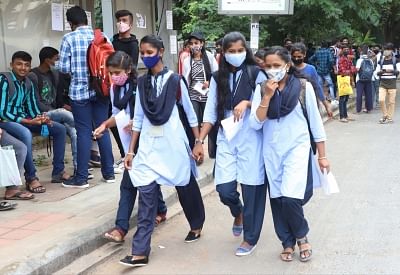