Government officials welcome Indian citizen on their arrival from crisis-hit Afghanistan by an Indian Air Forces C-17 aircraft, in Jamnagar, Tuesday, Aug. 17, 2021. | PTI
Follow us on

The government yesterday brought back to New Delhi its Ambassador in the Taliban-captured Kabul and all other embassy personnel. The special Air Force C-14 aircraft carrying more than 120 passengers including the entire Indian embassy staff, the ITBP personnel, four journalists, and other civilians landed at the Air Force Station in Jamnagar past 11 am. The plane halted there for refuelling and a meal break hosted for the evacuees on the suggestion of the prime minister. Evacuated Indians from Kabul chant Bharat Mata ki Jai inside a bus after landing at Jamnagar on Tuesday. | ANI 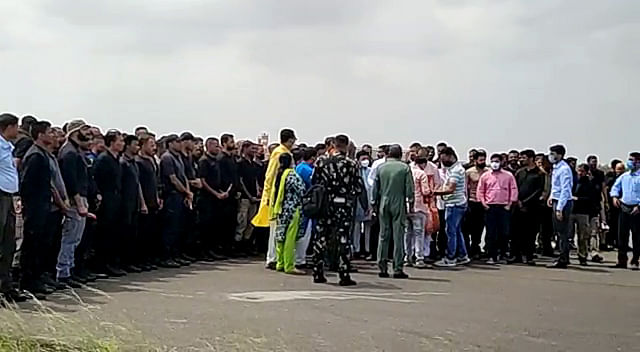 The Ministry of External Affairs said, “This can be accessed through our e-visa portal. We have already received requests from Afghan Sikh and Hindu community leaders, and are in touch with them.” By accomplishing this challenging evacuation mission in a war zone which was nothing short of plucking stars from the sky, the government proved that its contingency plan was well designed. Indian Air Force C-17 aircraft that took off from Kabul, Afghanistan with Indian officials lands in Jamnagar on Tuesday. | ANI

In a media release on the current situation in Afghanistan, the MEA said that it was decided to move embassy personnel immediately to India in view of the prevailing situation in Kabul. “This movement has been completed in two phases. We understand that a number of Indians are stranded in Afghanistan, some of whom are employed by third country organisations. Our immediate priority is to obtain accurate information about all Indian nationals currently in Afghanistan. They and/or their employers are requested to urgently share the relevant details with MEA’s Special Afghanistan Cell.”

In its release on Tuesday evening, the MEA said that the main challenge for travel to and from Afghanistan was the operational status of Kabul airport. “This has been discussed at high levels with our partners, including by the External Affairs Minister with the US Secretary of State.”

Sources in the government said that Prime Minister Modi was tracking the evacuation from Kabul and was up till late Monday night as the Indian embassy undertook rescue of stranded citizens. He was also updated on IAF's evacuation of officials from the Indian Embassy in Kabul. Sources said that the PM instructed the evacuees to get food on reaching Jamnagar, before heading to the final destination at Hindon Airbase in Ghaziabad.

External Affairs Minister S Jaishankar tweeted that the movement of the Indian Ambassador and the embassy staff from Kabul to India was a “difficult and complicated exercise” and thanked all those who made it possible.

After landing in Jamnagar, Indian Ambassador to Afghanistan, Rudrendra Tandon, thanked the Indian Air Force “who flew us out in conditions that are not normal”. Ambassador Tandon told the media, “You cannot imagine how great it is to be back home. After two weeks of intense work, very complicated situation, the whole mission is very happy that it is finally over. We are home safely, securely without any accidents or harm to any of our people. We were a very large mission with 192 personnel, evacuated from Afghanistan literally within a period of three days in a very orderly fashion in two phases,” he said. Describing the situation in Afghanistan as “complex and quiet fluid”, Tandon said that a small number of Indian nationals remained in the country and the government was continuously monitoring the situation to bring them back. “It’s not that we have abandoned the people of Afghanistan. Their welfare and our relationship with them is very much in our mind. We will try and continue our interaction with them. I can’t say exactly in what form. The situation is changing,” he said.

Tandon assumed charge as Indian Ambassador to Afghanistan in September 2020. Sources in the government said that technically, he will continue as Ambassador and all the processing of emergency e-visa applications will be done in New Delhi.