Meanwhile, the 76th Independence Day has celebrated in Antananarivo. A score of people attended the ceremony.

Madagascar PM Christian Ntsay & Amb of India to Madagascar Abhay Kumar ride bicycles together in a show of growing friendship. | Photo: ANI
Follow us on

India on Monday donated 15,000 bicycles to Madagascar on the occasion of the 75th anniversary of its Independence.

Country’s Ambassador to Madagascar and Comoros, Abhay Kumar and Prime Minister of Madagascar Christian Ntsay rode the bicycles together to display the growing friendship and solidarity between the two countries.

“India donates 15000 bicycles to Madagascar on the occasion of 75th anniversary of India’s Independence. PM @ChristianNtsay and @ambassadorabhay ride bicycles together as a symbol of growing cooperation and solidarity between the two #IndianOcean neighbours,” the official Twitter handle of the Indian embassy in Antananarivo, Madagascar & Comoros said in a tweet.

Meanwhile, the 76th Independence Day has celebrated in Antananarivo. A score of people attended the ceremony.

A national flag was also hoisted on the occasion by the Ambassador.

Azadi Ka Amrit Mahotsav is an initiative of the Government of India to celebrate and commemorate 75 years of independence and the glorious history of India’s people, culture, and achievements.

The idea behind the initiative is to invoke the feeling of patriotism in the hearts of the people and promote awareness about the tricolour.

While addressing the nation for the ninth time today from the Red Fort on the occasion of Independence Day, Prime Minister Narendra Modi urged the youth to dedicate the next 25 years of their lives to the development of the nation and highlighted five resolves to accomplish the same.

Wearing a traditional tri-coloured motif safa (headgear) with a long trail, the Prime Minister who arrived at Red Fort after paying tribute to Mahatma Gandhi at his samadhi at Rajghat was received by Defence Minister Rajnath Singh and MoS Defence Ajay Bhatt. 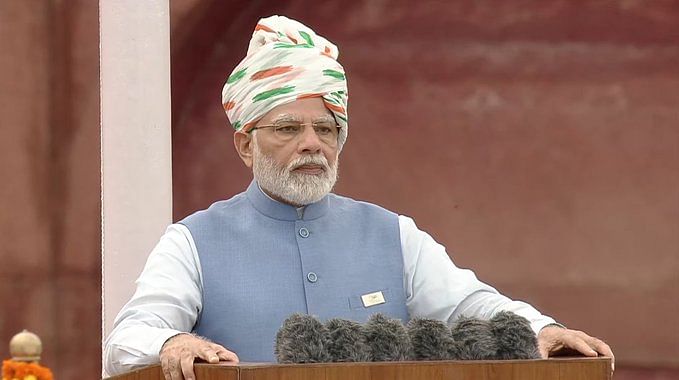